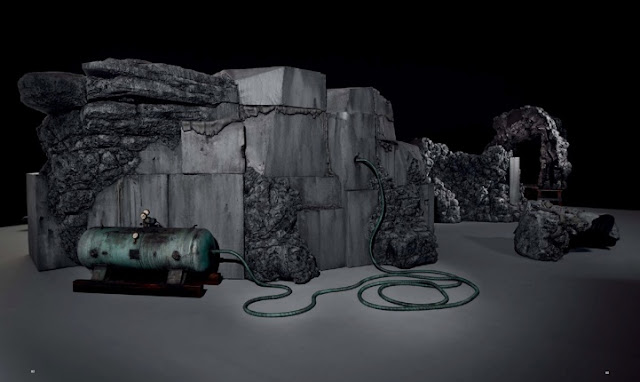 If you plan on being in London anytime in the next couple of months, I recommend you check out the new exhibit by American artist, Mike Kelley, at the Gagosian Gallery (6-24 Britannia Street). Exploded Fortress of Solitude bookends an earlier show at the Gagosian in Los Angeles (Kandor 10 / Extracurricular Activity Projective Reconstruction #34, Kandor 12 / Extracurricular Activity Projective Reconstruction #35)--both exhibitions staging an momentary point of exchange between Kelley's series of Kandor sculptures and his ongoing 365-part EAPR project.  In the interests of self-promotional full disclosure, I should say up front that I wrote the essay for the exhibit catalog (forthcoming from Rizzoli), so I am a particularly enthusiastic supporter of the show. 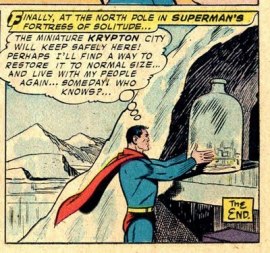 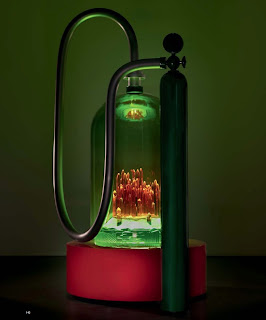 For those who don't know Kelley's work, the Kandor series is an ongoing sculptural project based on the "shrunken city" of Kandor featured in the silver-age Superman comics.  The capital of Krypton, Kandor was miniaturized and stolen by the evil Brainiac moments before the destruction of Superman's home planet.  At some point, Superman himself came into possession of the tiny city and its citizens, securing them beneath a large bell jar in his fabled Fortress of Solitude until he could find a way to return the Kandorians to their normal size (a task that took some 20 years of comic book time).  Fascinated by the fact that Kandor, as inked in the comic book, seemed to mutate into different forms with each new appearance, Kelley has over the past decade translated several of the comic panels into large sculptural form (Kandor 14 is to the left).  Like much of Kelley's work, the Kandor series plays with Freudian exchanges between the popular unconscious and the unconscious popularized, presenting Kandor as an insistent and quite literalized symptom of Superman's boyhood trauma.  In many ways, the sculptural pieces expand upon a reading of the Superman mythos that Kelley first introduced in 1999 with Superman Recites Selections from The Bell Jar and Other Works by Sylvia Plath, a video that
presents exactly what the title suggests--Superman reading The Bell Jar to the bell jar that hangs over Kandor.  If you find that as hilarious and as poignant as I do, I highly recommend taking a look at the catalog from the 2007 Kandors exhibition in Berlin. At the current London exhibit, the Kandors range in size from small table-top studies to the immense installation, Exploded Fortress of Solitude (at top), which requires the viewer to step inside to view a hidden Kandor 10B.  And even if you have little to no interest in Superman and/or Freud, the Kandors are well worth seeing if only for the beautiful play with color and texture that runs through the series.  Each is, in its own way, a truly remarkable object.


The EAPR series, meanwhile, is an ongoing video/sculptural project based on Kelley's 1995 piece, Educational Complex.  Below is a description of this project taken from the catalog,  Mike Kelley Educational Complex Onwards: 1995-2008 (2010, JRP Ringier).


In 1995, Mike Kelley devised the Educational Complex, an amalgam of every school he attended and of the house he grew up in, "with all the parts I couldn't remember left out"--a total environment, "sort of like the model of a Modernist community college." The blind spots in this model represent forgotten ("repressed") zones, and so are reconceived by Kelley as sites of institutional abuse, for which specific traumas were devised (each having their own video and sculptural component). For Kelley, this work marks the beginning of a series of projects in which pseudo-autobiography, repressed-memory syndrome and the reinterpretation of previous pieces become the tools for a poetic deconstruction of such complexes and the way we interact with and narrate them. 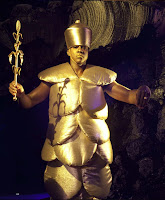 The Extracurricular Activity Projective Reconstruction project (EAPR) is to be a 365-part video/sculptural series addressing the "repressed" blank zones of Educational Complex.  Each EAPR is a promiscuous mix of personal memories, pop culture, and standardized "recovered memory" scenarios.  The London show debuts #36 in the series, "Vice Anglais," which imagines the life of Dante Gabriel Rossetti staged as a Hammer horror film.  Rossetti, displaced here as "M'Lord," leads a gang of perverts on a subterranean tour of debauchery, loosely organized around Rossetti's own famously salacious biography. Particularly stunning is the sudden appearance of M'Lord's muse, Golden Rod, an ambulatory yet mute corn cob creature apparently visible only to M'Lord.  At another point in the video, M'Lord wanders alone into a cavernous chamber and encounters--without explanation--the seemingly abandoned Kandor 10B. 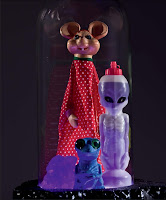 The London show also features a number of sculptural works independent of either the Kandor or EAPR series. Topo Gigio Topographical Model (detail at left) is a particular favorite of mine in its odd mixing of the whimsical and the creepy, a difficult tone that Kelley is particularly adept at achieving, here and elsewhere.

So if you're in the vicinity of Kings Cross, stop by and take a look. The exhibit runs through October 22 and the catalog should be available shortly thereafter.