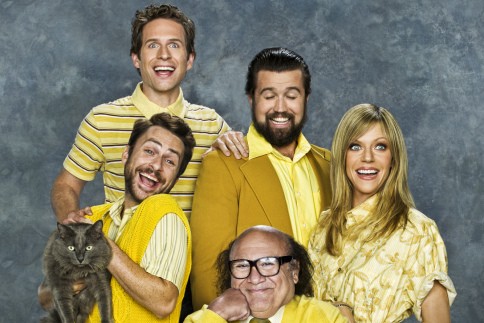 It’s Always Sunny in Philadelphia just began its seventh season on FX.  With any luck, the series will bounce back from a sixth season that, as any objective Phillyphile would agree, was uneven at best.  Last week’s premiere, “Frank’s Pretty Woman,” was certainly a good start, returning “the gang” to the moral muck in which they thrive best (Frank decides to marry his favorite prostitute, the gang decides she needs to be "classed up," hilarity ensues).
Sunny may well be the most distinctly “American” sitcom on the air at the moment.  That claim will make many bristle, I’m sure, especially those sensitized by post-graduate name-calling to resist any and all such sweeping generalizations about nationhood and identity.   So let me clarify: the series does not (and could not) speak to some impossible unity of “American experience,” whatever that might still mean for anyone beyond Tea Party time-travelers; instead, it rather doggedly documents a certain mindset that is unique (or perhaps just particularly widespread) in the USA of the twenty-first century.
Like many sitcoms, Sunny is a hybrid of earlier successes given its own distinctive twist—what might best be described in industry shorthand as a more loathsome Seinfeld meets a downscale Cheers.  From Seinfeld, the show borrows the now ubiquitous formula of urban singles who seemingly have little to no responsibilities beyond cultivating their skills at bantering.  Sunny also replicates the 3 guys/1 gal structure—but with the crucial addition of Danny DeVito’s “Frank” as the gang’s debauched and wholly irresponsible patriarch (Frank was a brilliant addition to the show’s architecture.  Father to the borderline American Psycho Dennis (Glen Howerton) and his ever-annoyed sister Dee (Kaitlin Olson), Frank doesn’t really seem to give a shit about anyone other than himself—devoting his senior years to drinking and whoring.  But as he either has (or had) money stashed away, he becomes the default protector/bankroller of the gang’s various misadventures).
But while Seinfeld and company most often worked over the everyday minutiae of middle-class aggravation (“first-world problems,” as some now call them), Sunny’s crew seems to bicker endlessly about absolutely nothing at all.  More to the point, each character is typically so dug in defending his or her own delusional take on the sitcom situation at hand that, in the show’s best moments, it creates a polyphonic exchange of variously narcissistic and selfish monologues that amplify more than answer one another.  Often this is the crucial ingredient in separating the best episodes from the average—whether or not cast and director have captured the best possible group rants on film (last season, for example, some of this banter—typically so “natural’ to the cast—seemed a bit more forced, for whatever reason).
Obviously, people everywhere in the world often argue about completely stupid and pointless things.  The distinctly American flavor of Sunny, I would argue, stems from the fact that each character, despite being a woefully uninformed and misguided idiot, is always completely and wholly convinced that he or she is 100% correct in any and all arguments—so much so that any actual communication, dialogue, and persuasion as we typically know them rarely if ever take place.  Characters will on occasion convince one another to cooperate in enacting a scheme of some sort, but most often these are only alliances of momentary convenience—each member of the gang is ready, willing, and able to screw over the other at the drop of a hat.  If Seinfeld famously lived by the credo “no hugs,” Sunny remains steadfastly committed to the principle of “no empathy”…for anyone…ever. 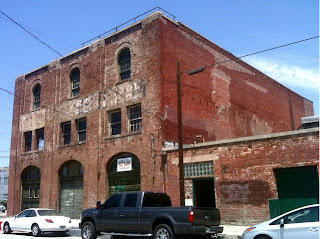 Set primarily in the crappiest bar in Philly’s most dilapidated neighborhood, Sunny also references Cheers, but with an emphasis on capturing more honestly the milieu of the chronic drinker (Paddy’s, or its Boston equivalent, is where Cliff and Norm would eventually end up after drinking away their pensions).   The “bar” set (or its displaced cousins like “Central Perk” and the “Peach Pit”) has long been central to TV architecture—public spaces where characters can congregate for jokes and plot points.  Typically these sets weave the characters into a larger social world—the cast surrounded by various extras that circulate to signify the characters' integration with our own reality.  True to the wicked inversions of Sunny, however, Paddy’s bar is a bleak and generally empty space.  It is occasionally packed on special occasions in service of the plot, but for the most part  has no clientele and merely serves as an echo-chamber for the inane bickering of the cast.  This isolation is further underscored in the exterior establishing shots that invariably depict the bar as standing alone in a beaten-down warehouse district devoid of all humanity, a place where one expects to see a tumbleweed blow by festooned with used condoms and dirty syringes (at left, L.A. exterior used for Paddy's--courtesy Flickr Yousuba&!). 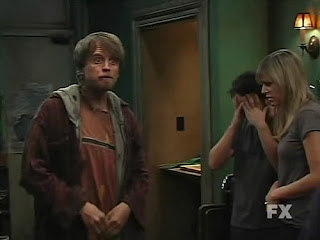 American comedy is frequently concerned with the invisible shell-game of “class,” typically in ways that stylize poverty to make it either a momentary comic irruption in middle-class life or the launching pad for eventual middle-class success.  Sunny, on the other hand, is particularly candid in examining the thin line dividing crippling destitution from out-and-out homelessness.   Given their location, the gang is constantly mixing with addicts, prostitutes, criminals, and—perhaps most magically—various shady characters that Frank and Charlie meet “under the bridge.”  Slightly better off than their neighbors, the gang’s relation to the human misery all around them is like that of most Americans—instrumental indifference (their repeated dealings with “Cricket" come to mind).  Building on this bedrock of a permanent underclass with no possibilities or aspirations, individual episodes often focus on the particularly American delusion--cultivated by almost everyone occupying a position other than Fortune 500 CFO or crack whore—that every citizen of the USA  is middle-class and rising.  Dennis, Dee, and Mac (Rob McElhenney), in particular, are constantly misjudging their positions on the economic, educational, and cultural ladder (Frank and Charlie (Charlie Day), for different reasons, don’t appear to care one way or another).
If nothing else, Sunny signifies how far television has come from the days of Buffalo Bill.  A noble one-season failure in 1983-84, Buffalo Bill was a much-heralded MTM sitcom starring Dabney Coleman.  The show garnered a lot of attention as the first sitcom to feature a lead character who was often “unlikeable” (a matter of judgment, obviously, as all of us no doubt have a sitcom lead from the 50s, 60s, or 70s we would like to punch in the face.  I’m looking at you, Hawkeye).   With Sunny we have an entire ensemble of assholes. 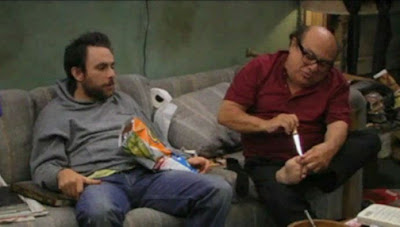 With one notable exception, perhaps unexpected in the show's original design.  Despite the program's general commitment to venal nastiness, Frank and Charlie’s warped father-son vibe has become somewhat of a moral anchor for the series.  Frank, again, has lived the middle-class “dream” of marriage, kids, and a house in the ‘burbs—but has decided, rather courageously, that he’d rather crash in a horrifying studio apartment and devote his time and energy to getting fucked up and laid as much as possible.  Meanwhile, his room and Murphy-bedmate Charlie is the show’s sole remaining innocent, a guy that one could imagine, given the right circumstances, might end up institutionalized either out of injustice, inconvenience, or a simple misunderstanding.   Like the rest of them, Charlie has his schemes.  But he also seems relatively content to never leave Philadelphia so that he might continue devoting his life to trapping the bar’s prodigious rat population.
So, to summarize: uninformed, narcissistic idiots constantly arguing at cross-purposes, standing in a dying business in a dying neighborhood, ceaselessly scheming their way toward greater class mobility and failing utterly, but protected from their unrelenting idiocy by the residual capital reserves of their putative father—what could be more American than that?
Email Post
Labels: Intentional Comedy The TV