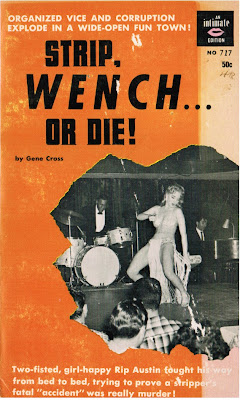 In addition to having a great name, Rip Austin has somehow landed the enviable job of being an insurance investigator who apparently only works cases involving strippers.  When his boss suspects a phony death claim up the coast from L.A., Rip jumps in his car to check things out.  No sooner does he arrive in town and start pumping some gas into his ride when a beautiful 18-year-old "dancer," clad only in a thin robe, runs from the club across the street and asks for his help.  Someone is trying to kill her!  Sure, baby, hop in!  Rip, you see, is ready for any eventuality, especially those involving crime and strippers.

And they're off!  Rip is such a man's man that even as the duo are chased at high speeds by thugs taking shots at their car, he still has the presence of mind to reach around and cop a feel off his new passenger, who of course is most open to such advances.  Even though the mob wants her dead and she's only just met Rip, she seems to understand intuitively that she'll feel just a little safer if she lets Rip grope her a bit in a fast-moving car.   But, unfortunately for both of them, a spin-out and crash kills the young lady and leaves Rip out-of-action for a couple of days.  But not for long.  Soon he's back on the trail of crime and corruption ripping this "wide-open fun town" apart at the seams.

Turns out the owner of the club is killing off his strippers for the insurance money (just the kind of job Rip Austin works, as it so happens).  Chapters alternate between Rip bedding the town's various exotic dancers, past and present, and the gathering of the necessary evidence to take down the slimy stripper boss.  A classic of its kind, I suppose.

The true showstopper here, however, is obviously the title and cover.  Strip Wench...or Die!  aka: If I don't get to see you naked I will kill you!  Somehow the brazenness of an already crass title is made even more skeazy by the publisher's decision to go with a photograph of an actual stripper rather than the usually stylized paint-and-brush fantasies typical of these books.  Racy in 1963, no doubt, the photo now underscores the unvarnished materiality of the mid-century nudie circuit--bad dancing and bad jazz served up to a room of drunken yokels, many of them presumably imagining how awesome it would be if their jobs in insurance and banking involved working exclusively with the stripper accounts.
Email Post
Labels: 1960s pulp sex trade Sleaze what boys think about