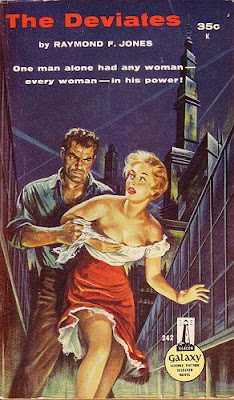 The genre, believe it or not, is science-fiction. And the teaser, "One man alone had any woman--every woman--in his power!"?....not a chance.  Not even remotely related to what's going on here.

After the nuclear world war, various genetic mutations are moving through the population. Some are awful, leading to "uglies" that are kept hidden "Boo Radley" style in the family home.  Other mutations are more beneficial, as in having telepathy and extended life span.  All "deviates," however, are considered a menace to human kind, and so a global genetics board decides who does and does not get to reproduce.  But the grand poobah of the genetics board, Robert Wellton, has a secret...he himself is a "deviate"--telepathy, extra-smart, etc. Even though human policy is to expunge any and all "deviates," Wellton believes the "beneficent deviations" (such as himself) should gradually be allowed to interbreed with the "normals" and save the human race (the eugenics program for "normal" humans, we are told, is slowly driving the species toward extinction).

Most babies are created by matching "normals," with the resulting offspring shipped out to various families.  Rarest of all is the nuclear family as we know it, bio-mom/bio-dad and the bio children all under one roof (they are so rare and envied, in fact, that they must live on guarded compounds to escape the wrath of would-be but thwarted breeders).  Five years earlier, Wellton lost his own wife because she couldn't handle not having a "real" family.

But then, suddenly and unexpectedly, she returns....with a baby...that she says is Wellton's!  Wellton lets her in on his plans, resulting in the  following prose:

The thing I should have told you is a new race is being born. For thirty five years, I have carried out a program of substituting my own deviate sperm in suitable instances, instead of the normal kind stocked by the Institute.

Wellton's deviant sperm children have been born to mothers around the world.  Each is a telepath who knows Wellton only as the God-like "Father" who comforts them from afar.  At the appropriate age, each of Wellton's progeny is encouraged to escape to a hidden compound somewhere in the wilds of Canada.  Each also has a suicide pill should they ever be taken captive by the world government.

Retiring from his post at the genetics board, Wellton is at last ready to put his plan into effect.  He arrives at the secret compound in Canada and announces that he wants his children to reintegrate into "normal" society, take on important positions of authority, and eventually convince the "normals" that they must accept the beneficent deviates to insure the future of the race.

But there's a problem.  Wellton's first and thus oldest son has a plan of his own.  Unbeknown to "Father," he has had the children working on a space ship.  If the normals want to hunt us down and kill us, he reasons, then screw them...we'll take our chances in space.  But Wellton is determined that not happen.  The deviates still owe a debt to the earth, to the human species, that must be repaid.  There's some more intrigue about Wellton's wife.  And the baby, Timmy, gets bayoneted by the genetic police.  All leading up to the final confrontation of "Father" and first-born deviate sperm baby.

All in all, not bad.  Still seems odd to slap an urban noir cover on a sci-fi title (thus ensuring that crime readers get mad when they actually started reading, while making the book pretty much invisible to  science-fiction readers).
Email Post
Labels: 1950s ESP/telepathy pulp sci-fi