If you were born in 1970, you certainly don’t need me to tell you that you recently turned 40.  Nor do I need to tell you that you are smack dab in the middle of that grumpiest of demographics, "Generation X" (a term variously deployed through the century, but most commonly associated with Douglas Coupland’s 1991 novel about the post-boomer baby-busters). While the exact parameters of this generation remain unclear (some go as wide as 1960 to 1982, others as narrow as 1965 to 1979), X’ers have long been regarded as the most cynical, detached, and ironic of population clusters.  Boomers, the logic goes, got all the good jobs and prime real estate, while Gen Y (aka, “the millennials”) got a renewed sense of earnestness, enthusiasm, and optimism.  X marks the spot in between—those pissed off at baby-boomers for their narcissistic entitlement and pissed off at the millennials for not being more pissed off.  Terrifyingly, Generation X is now beginning to send its own kids out into the world—a group that so far has yet to generate an appropriately pithy label (although “Generation Z” and “Generation Text” seem the most likely contenders).
Of these four admittedly amorphous categories, why do X-er’s in general remain the grouchiest?   After all, being a member of Generation Y is no picnic, especially if all your earnestness, enthusiasm, and optimism eventually force you to move back in with your parents.  Generation Z, meanwhile, may well be the most screwed of them all.  Luckily, as most Z’s have only a vague memory of the pre-Bush v. Gore world, they’ve known nothing but escalating bullshit for their entire lives.  They thus have no baseline of non-suckitude to cultivate bitterness or nostalgia.  Generation X’s “bad attitude,” on the other hand, has always been a function of living in the boomer shadows—culturally, economically, politically, and so on.
Just how resentful is X?  Two movies currently coursing their way through the tributaries of paid cable speak to the diabolical nature of the X-dilemma: Greenberg (2010) with Ben Stiller and Everything Must Go (2010) with Will Ferrell.  Do not be deceived by the fact that both films were aggressively marketed as comedies—they are not.  In fact, if you are a few years either side of 40, I would be sure to give yourself a break between the two screenings so that you don’t end up eating a box of razorblades. 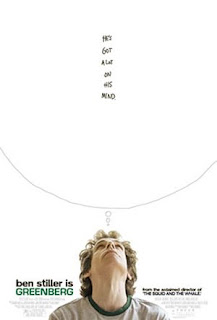 Greenberg’s ad campaign positioned the film as just another comedy of regressed masculinity: 40-something man-child moves to L.A. and realizes the time has come to grow up (in L.A. no less!).  This has become something of an idée fixe in contemporary film comedy over the past decade.  The 40-Year Old Virgin, Knocked-Up, I Love You, Man, and Step Brothers are all, in varying degrees, about guys creeping up on 40 who need to put their toys away (literally) so that they can successfully impregnate a woman (I have yet to see Our Idiot Brother, but I’m willing to guess it has its own unique take on this genre).   The back-story here is that Greenberg (Stiller), born and bred in L.A., has spent the past fifteen years working in New York as a carpenter.  Recently released from a mental hospital after a breakdown of some kind, Greenberg returns to L.A. to housesit for his brother and sister-in-law while they visit Vietnam.  He also boasts it is his opportunity to “do nothing” for a while, a life goal that his eventual love interest Florence (Greta Gerwig) finds courageous, given his age.  Of course, the sad joke is that Greenberg has been committed to doing nothing for his entire life—it is up to us and the less-than-stable, twenty-something Florence to figure out why.
From there, Greenberg runs the table on the various humiliations of the mid-life crisis scenario. There is the delusional fantasy of rekindling a romance with an old flame who has long since transformed into another person entirely.  Incensed at how stupid and poorly run everything is, Greenberg spends hours everyday firing off angry letters to anonymous institutions (like Starbucks), tirades that are to be read as feeble evasions from taking control of his own life.  When his niece arrives and throws a big house party, a coked-up Greenberg (in probably the film’s best scene) delivers an agitated generational rant against “these kids today” and their wholly unearned sense of confidence (a recurring X-er complaint about the young ones).  There is also the age-inappropriate haircut that Stiller gamely endures for the entire film.
Eventually we learn that the great trauma in Greenberg’s life, as well as among his former circle of friends, was the formation and subsequent break-up of their "next-big-thing" rock band back in the early 90s.  On the verge of making it to the national stage, Greenberg refused to sign a record deal that, he claims, would have sacrificed the band’s artistic freedom and turned them into "sell-outs."  Such is the central conceit of Gen-X cinema: the only moral compass that really matters in the end is the issue of subcultural authenticity, a divide as old as the celebrated case of Punk v. Part-Time Punk. Everyone else, as it turns out, would have gladly become plastic popsters, and they all still resent Greenberg for screwing everything up.
This premise, it should be noted, speaks to a certain contradiction in this genre.  If, as the film argues so adamantly, Greenberg (and by extension all X-er’s) need to “grow up” and become functional adults, then it would seem he did his band mates a favor by breaking up their adolescent fantasy machine and forcing them into real jobs with real wives and real kids.  Strangely, however, no one sees it that way. 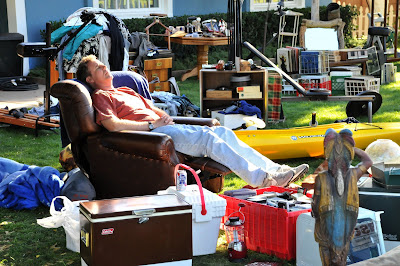 Will Ferrell’s “Nick Halsey,” meanwhile, has taken a different route in Everything Must Go.  When we first meet Nick, a slimy twenty-something is firing him from his job as Assistant Vice President.  Halsey, we learn, is a recovering alcoholic, and his termination stems from a relapse at the Denver office that may or may not have led to the sexual harassment of a co-worker.  On the way home, Halsey loads up with some 12-packs to make his fall off the wagon official.  Arriving at his home, however, he finds that his wife has thrown all of his possessions out on the front lawn, changed the locks, and left a note demanding a divorce.  Dealt this double-whammy of adult problems on the same day, Nick takes the one reasonable course of action available—he decides to live on his front lawn for a few days in a drunken stupor until he can figure things out.
From this inspired premise (courtesy of Raymond Carver), Everything Must Go doesn’t really know what to do with Ferrell or the situation.  Through movie logic we establish that Nick has five days to get his shit together (literally, by clearing his lawn, and figuratively, by devising a plan for the future).  Nick spends the five days checking off many of the same plot points that occupy Greenberg.  He also revisits an old romantic possibility, showing up unannounced on the doorstep of single-mom Laura Dern. Nick also finds a twenty-something woman (Rebecca Hall) to feel his pain—a new neighbor that seems to have relationship problems of her own.  Nick eventually learns “everything must go” in a giant garage sale, except of course for his impressive collection of vintage and thus authentic vinyl (there’s that Gen-X line in the sand again—it’s all about the good taste of appreciating “real” music, a quality that, in truth, does tend to make every male over 35 basically insufferable).
The strongest link between Greenberg and Everything Must Go, however, is a rather relentlessly heteronormative insistence that the only thing preventing both characters from achieving happiness is successful reproduction.  Greenberg is unmarried and childless at 40, while Nick notes, when asked if he has any kids, that he and his wife “have fish” (a collection of Koi swimming in the back yard).  Drunk and crossing the line with his new and very pregnant neighbor, Nick predicts how her marriage will eventually fall apart just like his (as a salesman, Nick prides himself on “reading people”)—but by the end, when her absentee husband finally arrives, her prodigious baby-bump tells us maybe, just maybe, they’ll be okay. 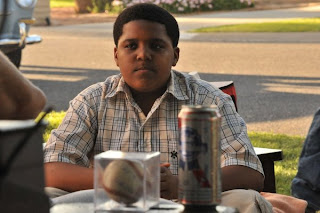 Of course, stepping straight from the “irresponsible” narcissism of childlessness to becoming a dad is not something that can be done in one step.  Happily, both films provide their dysfunctional X-er’s with a “training child” so they can get some practice first.  Greenberg must care for a suddenly ailing German Shepard, forming a temporary interspecies family with Florence.  Nick, meanwhile, temporarily adopts a chubby, fatherless neighborhood kid to help with his garage sale (“Will you teach me to play baseball?,” the kid asks at one point.  No, I’m not kidding, he really does say this).  As the film ends, we sense Nick is probably only a few months away from acquiring the necessary skills to take over in the Dern household (he’s been invited back, once he gets his life in order).
Now, here is what makes Greenberg and Everything Must Go such a diabolical one-two X’er punch.  Nick goes to college, gets married, gets a job, buys a house, and works like a chump for 15 years—only to be end up divorced and miserable on his front lawn.  Greenberg, meanwhile, stays “true to himself,” refusing to join the rat race of marriage, work, and responsibility—only to end up institutionalized, alone, and borderline suicidal.  The generational message for 40-somethings could not be any starker:  work or don’t work, marry or don’t marry, join society or reject society—it doesn’t matter, you’re fucked either way.  Goddamn boomers! 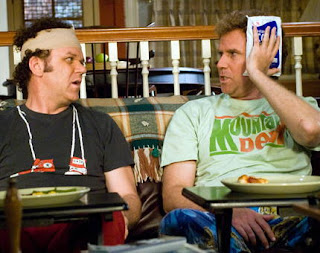 I think my favorite of this genre remains Step Brothers (2009), featuring Ferrell once again, this time alongside John C. Reilly.  It is a much broader, borderline gross-out comedy that actually seems more intellectually honest than either Greenberg or Everything Must Go.  Ferrell and Reilly play two guys in their mid-30s who, having been insulated from the "real world" by virtue of their rich single parents, basically live the dream-lives of 14 year-old boys. When the parents get married, the two must learn to live together as "step brothers," which they do blissfully until thrown out to fend for themselves.  As each takes the first tentative steps toward adulthood, there is a major falling out and ongoing feud.  What is their reward for becoming adults?  They both become incredibly boring and generally miserable.  Courageously, the film finds a way for them to remain "independent" at the end while also allowing them to regress back into their personas of endless adolescence.  I haven't read Judith Halberstam's new book on The Queer Art of Failure yet, but Step Brothers seems a likely candidate for inclusion. 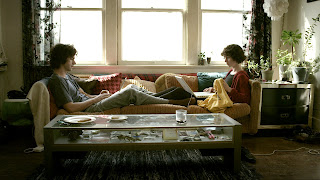 For those annoyed, finally, that this genre is so obsessively focused on retarded masculinity, you might want to check out The Future (2011), written and directed by Miranda July.  Here the specter of adopting a sick cat sends a 30-something couple into a major life crisis, constituted in large part by their realization that by the time the cat dies (in about five years), they’ll both be 40 (“and 40 is the new 60,” they both agree in classic anti-Boomer logic).  From here the film becomes an art cinema hallucination with July suddenly and seemingly randomly having an affair with a 50-something man, presumably because he’s an actual adult who owns an actual house.  I’d write more about it, but as that would require me accessing a form of subjectivity that I don’t fully understand, I’ll leave it there.  Some, I’m told, find July’s movies insufferably cutesy, but I appreciated the fact that the film made at least some attempt to escape the scourge of Hollywood naturalism. And it was nice, for a change, to see a woman as the center of all the generational floundering.
Email Post
Labels: Filmed Product Generation XYZ Intentional Comedy Normalization Regressive Phenomena