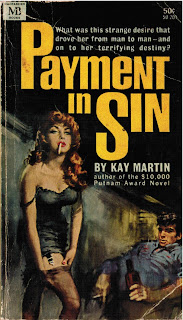 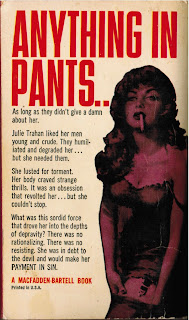 Beautiful Julia works the fair circuit selling "Hollywood" cosmetics to rubes and yokels.  She's doing so well she even just hired an assistant to help her with the pitch--plus she's caught the eye of Larry, the money and brains behind the carnival retailing circuit.

But Julia has a problem.

Years ago, when she first came to New York City to be a model, Julia dated a young kid named Lenni, the shy son of the owner of the modeling agency.  They had some kicks at first, but Julia eventually realized she didn't love Lenni and so she gradually broke it off.  Lenni was devastated.  So much so that he eventually shot himself dead straight through the temple.

At first Lenni's death didn't seem to affect Julia all that much, but eventually she began to have the compulsion to go out for "walks," which stands here as code for brutal, dehumanizing sex with complete strangers (or as the back cover puts it tastefully, "Anything in Pants").

Payment in Sin focuses on a fateful week in Julia's life as she tries to put the old ways behind her, working her booth at the fair and imagining a possible future with Larry.  Unfortunately, after six months on the straight and narrow, a nip of the demon gin brings back all the guilt and the irresistible desire to once again go "walking."

Author Martin handles this nicely by dividing Julia's world into two kingdoms--there is the big arena where respectable Julia sells cosmetics alongside other itinerant merchants, and there is the "fun zone," a sleazy midway of carnival rides and sideshows where slutty Julia goes for her "walks."  There she hooks up with Roddy O'Bannion, drunken son of the drunken sod who runs the Peep Show.  As you can imagine, Roddy is a real winner.  Soon they're both plastered and rolling around after hours on the stripper stage, a session that culminates with Roddy throwing some punches and putting out a cigarette on Julia's skin.

When she wakes up a few hours later, shame and remorse have set in.  She tries to sneak out and back to her hotel, but Roddy has other ideas.  He wants to go get his friend "Tuscaloosa"--a skinny, pimply kid who works the midway--so they can have a little "3-way" action.  Julia manages to escape before Tuscaloosa gets back...but her troubles are only really beginning.

The crisis grows more acute as Julia tries to evade the unwanted attentions of Roddy and Tuscaloosa while also trying to keep things going with the long-suffering and incredibly patient "Larry."  And of course, these two worlds must eventually collide.

If you examine the cover of this book closely, there is a note that  Kay Martin is "the author of the $10,000 Putnam Award Novel."  I doubt Payment in Sin was the winning entry (and strangely, in the age of Google, I can't seem to find which book did actually win Martin the prize)--but the book is certainly a cut above the standard sleazer.  And that cover!  Everyone should smoke with that expression on his or her face.