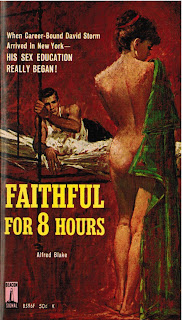 At long last, a pulp that finally delivers exactly what it promises.  After graduating college and receiving a few good notices for his theater performances in the small town of Earth Hill, Idaho, virginal David Storm is heading to New York City to make it big on the stage.  His equally virginal sweetheart, Valerie, plans to stay behind in Idaho until David gets his career off the ground--then she will join him in the Big Apple for marriage and housewivery. 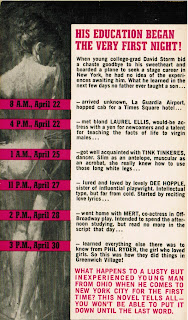 Arriving at La Guardia, David asks the cabbie where you can get a cheap but not horrible hotel in the city, one appropriate for "artistic" types looking to live inexpensively.  The cabbie smiles knowingly and dumps David in Greenwich Village.  No sooner is he set up in his room than he meets Laurel, an aspiring actress who quickly convinces the rubester to loan her twenty bucks.  They spend the night walking around the Village, Laurel introducing David to all the local haunts.  A perfect gentleman, David escorts her back to their hotel and says goodnight.

Next morning, he sees Laurel in a coffee shop. They have coffee.  Then they walk back to the hotel and Laurel tells David that she "likes him."  To bed they go, and just like that, David Storm is no longer a virgin.

He feels bad about it, what with Valerie still back in Idaho, but not so bad as to refuse an invitation from Tink Tinkers to go to a wild Village party the following evening.  Tink is a Village institution, known for her love of shocking and then seducing young men who have just arrived in the city.  True to form, she takes David to a party that features various world-weary bohemians and includes a "private" room for spontaneously staged sexual spectacles.  After watching two women making out in the private room, Tink and David return to her place.  Her plan has worked, and David is now twice-removed from his virginity.

And so it continues.  Next he beds Dee, the sister of an experimental, weirdo playwright, and then, after scoring a role in an off-Broadway production, David sleeps with his co-star Mert.

Meanwhile, back in Idaho, Valerie has her hands full repelling the attention of local boys who sense David is probably gone for good.  After a few defensive nights at the drive-in, she finally has one drink too many and loses her virginity to a local yokel named Ben.  She feels bad about it, like David did, but decides there's nothing she can do about it now.  But she is determined she must meet David in New York and soon as possible, and so she heads down to the bus station.

By the end, David has gotten a small part in an actual Broadway show and his career is looking promising.  He also realizes he's fallen in love with Laurel.  She feels the same; moreover, she's tired of hanging around the Village pretending she's going to be an actress some day.  She just wants to settle down with the right man, and that right man is David.

Valerie, meanwhile, arrives in the Village and finds out about David's impressive series of conquests during the previous week.  She decides to make him jealous by circulating in the same circles.  At one of Tink's decadent parties, various Village sharks circle around Valerie to see who will be the first to defile her.  Then, suddenly, a character named "Art Sanson," previously the most senior, cynical and debauched of this little circle, realizes Valerie is an innocent, beautiful Goddess that must be saved and protected.  He chases away the sharks and embarks on a "real" relationship with Valerie.  So everyone's happy in the end.

A particularly great feature of this pulp is the handy time-line on the back cover, which gives us a precise accounting of David's sexual encounters during his first week in the Village by date and time.  Note also that David, despite being from Idaho, is identified on the back cover as arriving from Ohio--no doubt because the New York copy editor for this book didn't know or didn't care about the difference between the two.  After all, both have some 'i's, 'o's and 'h's in the them, so who cares.
Email Post
Labels: 1960s beatniks boy energy Greenwich Village as portal to hell New Yorkitude pulp Sleaze