Wilson A. Barkman
Graphicopy Press
Apparently self-published account of author Barkman's fifteen years as a skid row alcoholic in the late '40s and 1950s.  After some preliminaries in which Barkman distinguishes social drinking from alcoholism, he begins his story with the moment his first wife packed-up and left home due to his uncontrolled binges--he never saw her again.  Soon after her departure, Barkman finds himself homeless and riding the rails to L.A. for a prolonged stay in the city's infamous skid row flophouse, The Emperor Hotel.  Individual chapters then take on such topics as "the female alcoholic," "greasy spoon" diners catering to "bums," religious charities, and dealing with libraries and librarians.  There is also an interesting account of the typical day in the life of a skid row drunk, with emphasis on the awful somatic symptoms of remaining intoxicated day after day. 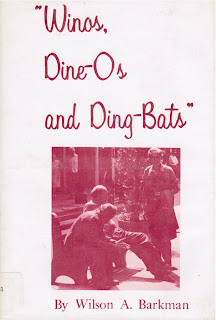 Barkman realizes he's really hit rock bottom once he begins being plagued by a series of terrifying D.T. hallucinations, starting with a pack of vicious wild "chickens" that chase him through Central Park and into the detox ward at Bellevue.  Three months later the D.T.'s are back as are the hallucinations: a bear, purple vultures, a multi-colored warthog, and a taunting leprechaun.  Barkman decides he's had enough.  He hops the rails from New York to a clinic in Fort Worth and drys out.  Successfully, it would seem.

A blurb on the back, written by a friend of Barkman's, describes him in the present day (1971) as "the very essence of a conservative, Christian gentleman."  We also learn that before writing this autobiographical account of his time on skid row, Barkman had been working as a "ghost writer" for several "young local politicians" (in Dallas) and as a "nom de plume" contributor of "slush" to various "true love and romance" magazines.
Email Post
Labels: 1950s drugs Psychosis religion