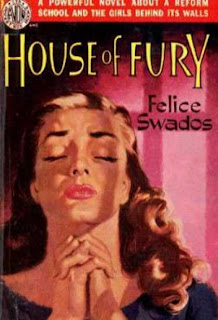 Despite the incidiary title (in both incarnations), this is actually a serious attempt at a social problem novel about "bad girls," obviously, but also and somewhat unexpectedly about mid-century segregation.  At a reform school for girls that seems to be somewhere in the American south, 18-year-old Bonnie watches over two cabins of African-American girls, segregated from the larger population of white girls supervised by 18-year-old "Jeff" (short for Jefferson).  Each day as the white girls go into the fields to pick cherries, apples, and other fruit, the African-American girls are assigned the much more unpleasant tasks of laundry, latrine duty, and general housekeeping.  The centerpiece of the story is a bid by two of the black girls, Bluebell and Orchid, to make their escape and find their way to the city--a trip filled with equal parts danger and degradation.  With the girls on the lamb, Bonnie and "Jeff" bond over their shared status as young women ruling over a world of volatile girls, a "forbidden" friendship that only increases racial tension in the school.  There is also the requisite tomboy with a profound "crush" on Jeff, a plot-line that resolves with a rather candid promise that the two will share an apartment once the younger girl finishes her stint in reform school.  Rumors, misunderstandings, and general delinquent tension lead to the equally requisite "riot" scene toward the end--prelude to the author's real motivation in the story's conclusion.  Jeff, herself a product of the school, finally decides the time has come to move on and enter the real world.  As she leaves for a promising job in the city, she makes eye contact one last time with Bonnie as she leads her girls to the laundry room for another day of back-breaking labor.  We are left with the realization that once "free," Bonnie will be doing pretty much the same thing on the outside.
Email Post
Labels: 1950s has ambition j.d. not bad-pretty good in fact queerish WiP