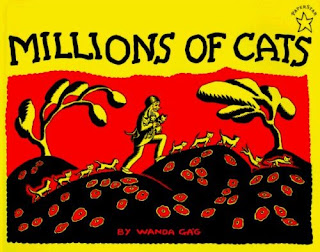 Old woman instructs husband to procure a cat for their cottage.  He travels to a hillside where there are, and I quote, "hundreds of cats, thousands of cats, millions and billions and trillions of cats."  His goal is to find the "prettiest" of the cats, but this proves difficult as all of the cats have something to recommend them.  He continues to amass what he views to be the most outstanding cats until finally he has selected the entire colony, which I must again remind you is estimated to number in the trillions.  Despite the unprecedented logistical challenge, he decides to bring all of the cats back to his cottage.  On the way, the teeming herds create an eco-disaster by drinking an entire pond and eating an entire field of grass.  When the man finally returns with his trillions of cats, the old woman scolds him as there is no way they can sustain so many felines on their meager resources.  It is decided that the cats themselves should choose who among them is the "prettiest."  Miraculously, the cats appear to understand this mission and what is at stake, and so they begin to "quarrel" among themselves as to which cat is the prettiest.  The fight becomes so loud that the old man and woman retreat into their cottage.  Ominously, the next morning, there are no cats remaining, leading the reader to suspect that they have battled one another into extinction.  But then the old man finds a skinny kitten hiding in the weeds, a cat that apparently suffers from low self-esteem.   Having never claimed that he was the prettiest of cats, he was able to avoid the previous night's bloodbath.  The old man and woman choose this cat, and after brushing and bathing him, decide that he is indeed the prettiest of all cats.
I think the lesson here is: 1). Men are bad at shopping; 2). Cats are extremely vain; 3). People who like cats can find something to admire in just about any cat, no matter how scrawny, bedraggled, or psychologically-scarred.
Email Post
Labels: 1920s animals kids