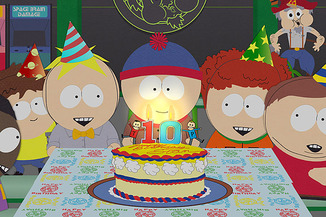 If you've fallen out of the habit of watching South Park (and no one would blame you--it's been on the air now for a somewhat unbelievable 15 seasons), you really owe it to yourself to check out this week's mid-season finale, "You're Getting Old." Don't be fooled by Comedy Central's typical misdirect in the promos (which pitches the episode as another fart-filled satire on pop-music trends--in this case a mythical "tween wave" explosion sweeping the nation).  The episode is much more interesting than that, ending with a moment of genuine melancholy that has many pop-pundits and fans speculating the series either has or will very soon come to an end.  Technically Parker and Stone owe the network 6 more episodes before their current contract is up, but who's to say they might not pull a Chappelle and simply walk away.  It would be a great and completely appropriate ending, closing the series in a genuinely thoughtful way and--in keeping with their often antagonistic relationship to their employers--denying CC the opportunity to do a month of hype in anticipation of an announced series finale.

Why did this week's episode surprise so many long-time viewers?  Mainly because of some rather significant transgressions of format, cues that this was meant to be, dare I say it, a "very special" episode.  The story opens with a party for Stan's tenth birthday, thus puncturing the "timeless" oblivion so crucial to episodic television, and in particular the contemporary animated progeny of The Simpsons.  Actually, South Park did make a gesture toward this earlier in the run by having the boys advance a grade at school (most likely to punch up the classroom aspects of the series).  Stan reaching the ripe old age of 10, however, signals something more definitive, especially in that his move into double-digits brings with it a genuinely troubling philosophical crisis.  Stan notices that the "tween wave" music that he once loved (and that Kenny, Cartman, and Kyle continue to idolize) now sounds like shits and farts.  Later, at the doctor's office, he is unable to distinguish between a movie poster for the new Kevin James' film and a picture of a re-heated turd in a microwave.  Just as 99.99% of South Park's viewers are identifying with the beauty, classicism, and necessity of this gag, the doctor has bad news for Stan (and the viewer): he has become a "cynical asshole."

For the middle-block, Stan becomes a surrogate for any and all who have ever felt themselves to be living in cultural exile.  Everything looks, sounds, and tastes like shit to Stan, evoking an endless litany of complaints over how crappy, predictable, and generally awful everything has become.  Stan's cynicism is so unchecked, in fact, that the other three boys begin to avoid him--they want to retain the ability to enjoy the new Adam Sandler movie or Jim Carey in Mr. Popper's Penguins as actual entertainment.  In the "B" plot, meanwhile, Stan's parents, Randy and Sharon, are involved in another huge fight (ostensibly over Randy's purported love of "tween wave").  All of this leads to the episode's wholly unexpected and surprisingly poignant close--an extended montage of the Marsh family dissolving set to Fleetwood Mac's "Landslide." Yes, the show that once depicted Stevie Nicks as a braying goat here uses her signature ballad without a shred of irony, acknowledging (at least it would seem) that the song actually does possess some degree of beauty and wisdom.

Well, I've been afraid of changing
'Cause I've built my life around you
But time makes you bolder
Children get older
I'm getting older too

It may seem corny and improbable, but it's a beautiful moment of television, even more powerful because it's so thoroughly unexpected given the show's reputation and history.  It's also a complicated gesture, one that reaffirms that pop culture can be every bit as allusive and complicated as "high" literature and art.  Some are interpreting the ending as Parker and Stone's personal realization that its time to move on, that they can't go into their forties and fifties still making fart jokes and simply ripping on each month's current pop outrage.  Then again, the very premise of the episode suggests that such cynicism is an inevitable product of age (part of the effect here is the sense that after this episode, it's hard to imagine how Stan can simply go back to being the Stan of old).

Here the question becomes positively Kierkegaardian: how does one share the world with Kevin James?  Is it pathetic, sad, and futile to continue struggling against a world that gives us such a steady diet of reheated turds in the form of Kevin James' movies, or should one simply acknowledge that Kevin James (and others like him) are never going away, and so you might as well turn your attention to something more productive in life?  Either way, it's a diabolical dilemma, sort of a pop-consumer version of the "red pill/blue pill" choice offered Neo in The Matrix.  As they now get older, what will South Park and its audience of veteran ironicists do?  Continue with a critical-political position of bitter disaffection from the mainstream of American culture, or make some attempt to change it through strategies other than reflexive negation?

If nothing else, it certainly raises the stakes on The Book of Mormon, Parker and Stone's soon to officially open Broadway production, and by all accounts a surprisingly empathetic account of religion and faith in general (and again, as with Nicks, based on a previous target of merciless ridicule).  Is this the end of irony and a shift to the ethical life?  The next six episodes (if they happen) should be very interesting.
Email Post
Labels: Christians Intentional Comedy The TV