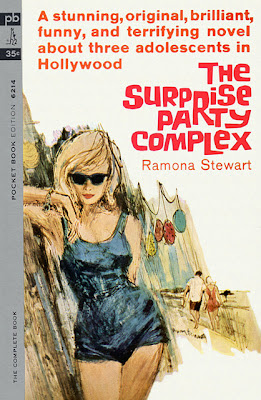 Novelists have been trying to capture the "vibe" of Hollywood for almost a century now.  These novels might be divided thusly: 1). those that focus on the perceived glamor of Sunset, Hollywood, Wilshire and the other famous boulevards associated with the film industry; and 2).  those that focus on the lesser known and more seedy surface streets that run north to south.  The first books are about real or would-be "stars," the second are about the endless legions of transient populations that move in and out of the many faux-Spanish apartment complexes between Hollywood and Santa Monica boulevards.

The Surprise Party Complex is most definitely from the second category, focusing on three teenagers thrown together for a few months in a "Norman castle" made of stucco just off Hollywood.  Pauline and her once rich now deadbeat dad arrive in town with no money, sell the car, and try to survive until dad (who goes by the name, "O.K.") can round-up some investors in a promising silver mine up north.  Pauline, 15, first meets the daughter of the apartment's manager, "Chris," who spends her days listening to police scanners, reading detective magazines, and learning martial arts.  Whether Chris knows it or not yet, author Stewart certainly has her pegged as a young lesbian--mortified when her mother reminisces about boy-girl courtship practices in Kansas and unable to stay comfortably in a dress for more than 30 minutes at a time.  Pauline and Chris never really have anything in common, but do start to hang out on the roof of the apartment out of boredom.  Eventually a slightly older boy, Jaime, completes the trio and turns out to have the most troubles of all.  The story unfolds around Pauline's gradual realization that both her father and Jaime are putting up a brave front against past and future disappointments.

Despite the slightly sexy California cover and the emphasis on adolescent innocence, The Surprise Party Complex ends up being as much about the variously dysfunctional single parents of the three kids.  O.K. and his endless schemes to get his money back--Chris' hyperfemme mom who, when not lecturing her daughter to be more ladylike, is out cruising the local bars for "companionship"--and Jaime's mom, who was either a stripper, prostitute, or madam in St. Louis, and now spends her days in bed drinking champagne and popping downers.

All in all a nice surprise in the adolescent disillusionment genre.  There isn't much information on Ramona Stewart out there.  Two of her books made it to the screen, Desert Fury (1947--based on her book Desert Town) and The Possession of Joel Delaney (1972).  In his book Pictures at a Revolution, Mark Harris notes that Peter Nelson, a screenwriter considered for work on The Graduate, attracted attention because of his spec script for The Surprise Party Complex--but the book does not appear to have ever been filmed.
Email Post
Labels: 1960s boy energy has ambition Hollywood not bad-pretty good in fact queerish teens