Post-Mandingo miscegenation smut written by, somewhat incredibly, one of the major figures in the history of D.C. comics.  Before joining in the appalling S/M trade in slave lust, Fox created the Sandman and Hawkman, wrote the first three issues of Flash, and gave Batman his famous utility belt and "batarang." He was also a  prolific contributor to various pulp magazines of the era.  In the 1960s  he moved on to writing popular novels and produced nearly one a year until his death in 1986. 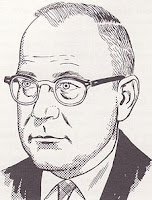 Fox mostly stocked the sci-fi and horror shelves, so who can say what inspired him to jump on the Antebellum sex-plantation circuit (other than $$$ of course).  As for the novel itself, we open with virginal slave girl "Delilah" seeking out "Mama Loa" in the dark of the Louisanna night.  Melissa Stone, the current plantation master at Stonehedge, has slated Delilah for public impregnation by "that Cass man," the plantation's largest and most virile slave.  Despite obtaining an amulet from Mama Loa to ward off her rendez-vous with Cass, Delilah soon finds herself as the main attraction at one of Miss Stone's decadent parties.  Every time a virgin needs studdin', it seems, Miss Stone invites over all her kinky weird white neighbors to watch, most of whom read as if they were Truman Capotes' great-grandparents. 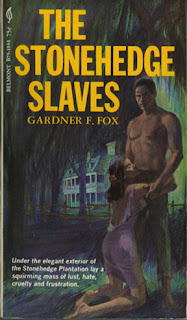 Just as the big night is about to begin, however, who should return from his extended trip in Europe but Randolph Stone, Melissa's older brother and the rightful heir to the Stonehedge fortune.  He quickly puts a stop to the sex show, and in quick order makes Delilah his own personal "body servant" (which means she has to take care of his shirts and have sex with him in the bathtub).  He also demotes Cass from his coveted stud position and replaces him with the younger and stronger Mark Anthony.  There's going to be some changes (and trouble) at Stonehedge, clearly.

Sister Melissa and Cass are less than happy with the new arrangements, and the rest of the book chronicles their attempts to reclaim their former positions on the Dixie live-sex-show circuit.  To get back at brother Randolph, Melissa must of course take her own personal African body servant (thus fulfilling the primary generic demand of these novels--the Buck as willing/unwilling sex-toy for the rich white lady).  When Randolph finds out, he is of course outraged, fulfilling a second generic demand of miscegenation smut--the hypocrisy of white guys sleeping with the forced labor who find it abominable that a white woman might do the same.  And then: Randolph orders Mark Anthony to castrate Cass (for trying to kill him), a jealous slave kills Melissa with poison, and Randolph meets a respectable rich white girl in New Orleans and decides to sell off the quarrelsome and increasingly promiscuous Delilah.  In a particularly offensive ending, Randolph then grants the loyal Mark Anthony his freedom, but Anthony is terrified at the thought of leaving Stonehedge ("I a slave, masta," he pleads).  Randolph opines that everyone--black or white--is a "slave" to something--liquor, sex, power, etc., ignoring of course that the power relations involved in actual slavery are somewhat different than those in lust and the demon drink.

Like the genre itself, utterly slimy and sleazy.  Would be greatly improved, both politically and aesthetically, by the sudden and unexpected appearance of a Hawk, Sand, or Bat Man.
Email Post
Labels: 1960s Comics drugs sex trade Sleaze