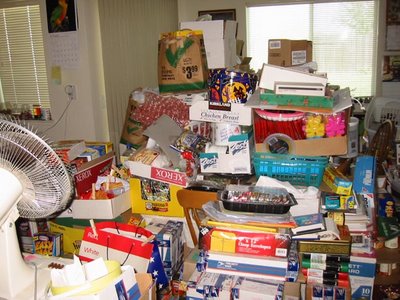 Good news for those who have an inordinate interest in symptomatic neurosis: Hoarders has returned for a fourth season on A&E.  Since its premiere in 2009, Hoarders has become a rather unexpected “hit” (at least in basic cable terms), introducing viewers to some 80 “hoarders” over 40 episodes.  “Hoarding” should be a self-evident condition, but if not, here’s the Mayo Clinic’s definition:
Hoarding is the excessive collection of items, along with the inability to discard them. Hoarding often creates such cramped living conditions that homes may be filled to capacity, with only narrow pathways winding through stacks of clutter. Some people also collect animals, keeping dozens or hundreds of pets often in unsanitary conditions.
The Clinic goes on to add that “hoarding” is sometimes but not always linked to obsessive-compulsive disorder (OCD), and that treatment for the condition can prove difficult in that individuals “often don’t see it as a problem.”
The Foucauldian and/or libertarian in you might be saying, “If so-called hoarders don’t perceive a problem, then why not just leave them alone?”  That would be fine, except the practice of hoarding typically leads to a confrontation with an institution that will not abide such behavior: neighbors complain about the junk in the yard; the courts threaten to take children away; landlords threaten to evict; spouses move-out; rats move in; and so on.  The A&E series usually starts each story at one of these crisis points, the moment when friends and family decide grandma can no longer be allowed to live buried underneath piles of ever expanding garbage (lest they have to take her in themselves).
"Hoarders" appear to come in two basic forms: 1). those who fixate on accumulating a particular item (dolls, plates, junked cars, animals, etc); and 2). those who manifestly refuse to allow any material object to exit the home (empty bottles, old newspapers, pizza boxes, etc).   The first type is the more rare and of interest precisely because the symptom is so specifically Freudian (why tea sets? Parrots? Cabbage Patch dolls?)  But the real meat of the series is the second type—those who have let a once pristine house or apartment devolve into abject squalor, not only “hoarding,” but abandoning any attempt to organize—much less utilize—any of their precious possessions. 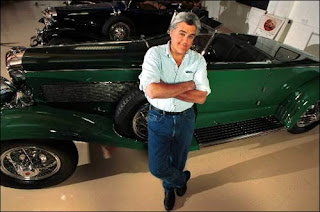 A&E tries to pass off Hoarders as a “documentary” series, but do not be fooled—it trades in the very same class horrorshow as bottom-feeders like Cops.  The problem for most “hoarders” is not so much that they hoard things; rather, it is the lack of resources that prevents them from hoarding items in a more socially acceptable manner.  Jay Leno, for example, is by all accounts a disturbed hoarder of vintage automobiles.  Given that he has sufficient real estate to house the vehicles, however, no one seems poised to make an intervention.  If Jay collected vintage microwave ovens on his front yard in Encino, on the other hand, the Sheriff’s office would be there each week ticketing him for his socially and psychologically disturbed behavior. 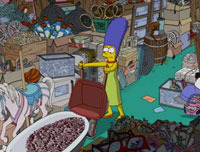 The “intervention” structure of the series flatters viewers into believing they are concerned for the psychological welfare and eventual recovery of each week’s hoarder—but in truth the primary attraction here is the anarchic spectacle of unchecked consumption and the ensuing cycle of obsolescence, decay, and contamination.  Perhaps this explains the unexpected popularity of the “hoarding” meme over the past three years (even Marge Simpson temporarily fell under its sway this past season).  As the economy contracts, severely impacting the lower middle-classes that Hoarders so frequently showcases each week, the series stages a surprisingly frank confrontation between a commodity life disrupted and a psychological life traumatized—something that now almost everyone can relate to in some fashion.

Looking back from the other side of the economic meltdown, George W. Bush’s wartime advice to “keep on shopping” now seems even more pathetically desperate and sad—a “clap for Tinkerbell” strategy that could only succeed for so long.  Now that everything has gone to shit, the “hoarder” stands as a particularly tragic yet fascinating figure, an individual who makes the inevitably deteriorating cycle of consumption and happiness most explicit.  Some hoarders, like demented squirrels, have to bring some new “acorn” home everyday lest they feel intense psychic distress for not making an acquisition.  And, as the series loves to showcase repeatedly, once an object—no matter how insignificant and utterly disposable—is in the home, the prospect of removing it causes what is obviously an intense psychological crisis. In one episode, a therapist confronts a woman with hundreds of sweaters that have never been worn.  Following the fashion-industry’s rather self-serving advice that any item not worn in a year should be given away, the decluttering team attempts to persuade the woman to sell some of them at a garage sale.  But when the time comes to pick the actual sweaters to put on sale, the woman becomes anxious and distraught—her expression revealing a mental calculus equating “having” with happiness and security, “not having” with depression and vulnerability.  Given that other family members are threatening to walk unless the sweater problem comes under control, her pained and almost panicked reaction enacts Marx’s “commodity fetish” in most literal and poignant terms. Having the magical cloak of 500 sweaters seems more important than any human relationship within the house. 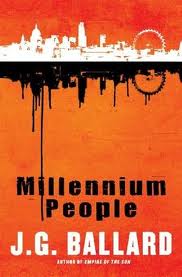 Hoarders intersects in an odd way with a major theme in the last few novels of J.G. Ballard.  Super-Cannes (2000), Millennium People (2003), and Kingdom Come (2006) are all essentially the same book—each trying to capture the post-millennial malaise of a western middle-class for the most part immune to scarcity and danger, bored to death in their suburban compounds, and half-heartedly invested in the last remaining erotics of contemporary life: cycles of sexy commodity consumption.  Millennium People is perhaps the most successful of the three novels, telling the story of a London psychologist slowly drawn into a middle-class terrorist cell operating out of the privileged neighborhoods of Chelsea.  The cell’s targets involve, not governmental or military sites, but rather those institutions that symbolize the politics of leisure: travel agencies, video stores, cat shows, etc.—disruptions staged in an effort to wake the slumbering middle-class from their insulating cocoon of unreflexive consumerism (in one chapter, a “terrorist” dons the garb of a social scientist/market researcher and goes door-to-door in a rich development asking homeowners survey questions specifically designed to make them uncomfortable about just how boring their lives have become).  The thesis that middle-class consumption replaced proletarian labor as the primary engine of capitalism in the twentieth-century is not necessarily original or unique, but appearing in 2003, right at the threshold of the global economic meltdown and the rise of the TV hoarder, Ballard’s novel seems—once again—eerily prescient.
Perhaps these are the times we are living through: a disenchantment with commodity life attached to its future improbability.  All of which makes the “hoarder” all the more fascinating—an empathetic figure who believes if they just store enough shit in the house they might just get by (or better yet, find happiness), even as the continued storing of said shit in fact only makes them more miserable.  And hats off to A&E for designing a compelling advertising vehicle that hinges, for the most part, on our growing revulsion at spectacles of consumer alienation and dysfunction.
Email Post
Labels: Bio-Horror Books Commerce England Fatal Strategies Modernity-ism Overstimulated Consumers The TV