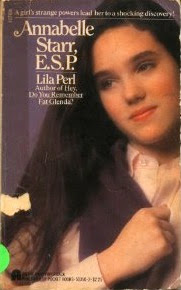 In a depressing small town in upstate New York, Annabelle lives with her grandparents and a little brother they adopted to keep Annabelle company after her parents died in a car wreck.  Annabelle thinks she has ESP because one day all the answers to a quiz about the Panama Canal came to her magically, even though she didn't study for the test.  One day a woman from the city, Lauren, comes to the town and rents a room in Annabelle's house, a room conveniently situated all alone in the home's gothic turret.  Annabelle thinks there's something weird about Lauren and becomes convinced she's actually her little brother's biological mother, come to spy on or maybe even kidnap him.  She engages in a little spying of her own, leading to a Rear Windowish moment when Annabelle and her best friend find themselves trapped in the rented room just when the mysterious border returns.  Eventually Annabelle's theories begin to freak-out her brother, who in an attempt to evade the scary possibility of the returning birth-mom runs out into an interstate and almost gets hit by a truck.  But it turns out Lauren isn't the boy's mother, it's just that she had a son of her own that died at the age of 4 who looked a lot like the Annabelle's little brother.  There is some dating issues on the side.
Email Post
Labels: 1980s ESP/telepathy Gothic kids Paranormal teens