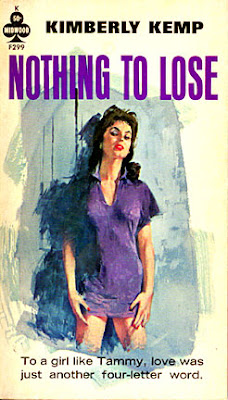 As we open, college senior Tammy Townsend is posing for pictures in the basement of a fraternity house.  After taking some rather innocent snaps, the fratographers ask if they can do some photos "like in the detective magazines," which means Tammy + lingerie, ropes, and fake blood.  Tammy says yes, but once she's down to her skivvies, she starts to have second thoughts.  But the two frat guys are determined to get some good sex-crime shots they can sell, and so they tie her to a table and let the shutters fly.  And Tammy...Tammy likes it!

Later, with her clothes back on, Tammy joins her art professor, Norman, on a field trip to the nearby small town of Grey Gulch.  The plan is to expose the local yokels to "great art," much of which includes paintings of nekkid woman.  The Dean tells Norman this isn't a good idea, as the citizens of Grey Gulch are renowned for being backwards and prudish, but of course this makes Norman even more determined to make them look at nudes lounging on couches and eating grapes.  It's for their own good!

Sure enough, once the show goes up in the local high school, community elders make it known that they don't want their kids looking at nudie pictures.  Shouts and threats go back and forth and the high school is put under lockdown for the night.  Tammy has a key, though, so later that night she comes back by herself to contemplate the art and ponder why the locals would find it so offensive.  This proves a bad idea, however, as Tammy is abducted and sexually assaulted by drunken members of the high school football team.

For reasons that I can't entirely recall at this point, Tammy's assault somehow lands Tammy in the jailhouse.  Her cellmate for the night is the "town whore," Francine, who does her best to console the despairing co-ed.  One thing leads to another, and before you know it, Tammy understands why she has felt "confused" around boys her whole life.  Tammy is a lesbian.

Bailed out the next day, Tammy returns to campus with Norman.  The Dean lectures them both for getting the school into all this turmoil.  He fires Norman and expels Tammy.  This is most unfair, especially to Tammy, but no one makes much of a fuss because in the next chapter...

Tammy and Norman now have an apartment in New York City and live as platonic roommates.  That's fine with Tammy, as she is still pining for her night of bliss with Francine.  Norman, on the other hand, is less than thrilled with the arrangements.

Life in New York isn't cheap, so Tammy soon has to hit the bricks in search of a job.  Seeing an ad for "new models," she shows up in her best outfit and makes a good first impression with Sharon, a former model and head of the agency.  Sharon, Tammy notes with pleasure, is even more luscious than Francine, and she wonders if the attraction is mutual.

Tammy's first modeling job is wearing leather wading boots for a kindly old photographer named Otto, who instantly takes a paternalistic interest in the young girl. He tells her to get out of the business before she "goes bad."

It isn't long, of course, until Tammy discovers that Sharon does indeed share her attraction, and soon she's moving out of Norman's apartment and shacking up with Sharon full-time.  Sharon, meanwhile, sends Tammy to increasingly "depraved" modeling assignments, culminating in an attempt to trick her into starring in a porno film with...a man!  Luckily, just as Tammy is about to be forced into a sex scene with the male actor, who should show up but an outraged Norman.  He has spent days trying to track down Tammy in her "secret" modeling career, and now that he's discovered what she's up to, he's disgusted.  He calls her a dirty slut and storms out of the studio in anger.

With this, Tammy decides she's sick of being Sharon's bottom-porno-bitch, and so she decides to hatch a revenge plot.  Consulting with Otto, she arranges for the police to raid a big sex party hosted by Sharon and her perverted filmmaker friends.  She also breaks into Sharon's office and steals a batch of incriminating photos that Sharon has used to blackmail Otto into remaining a "sleaze" photographer rather than becoming a legitimate artist, which he most surely is.

With Sharon busted and Otto liberated, Tammy relishes her escape from the clutches of New York's "modeling" circuit.  She's now going to work with Otto in setting up his new, "artistic," and totally legit photo business.  And Otto has a surprise.  He's hired a talented new assistant to work with him in the studio.  It's Norman!  Apologies and kisses--lesbian threat defeated.  Art, sex, and commerce all put into "appropriate" balance.  The end.
Email Post
Labels: 1960s academe art evil academics naive girl + big apple New Yorkitude queerish Sleaze