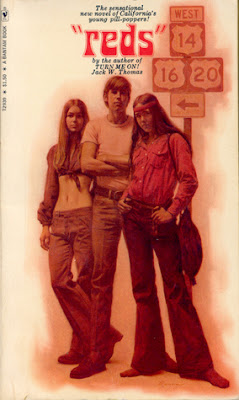 1970 or so:  Dorcie and Polly really hate high school, so much in fact that, beneath the Ventura Underpass, they vow to ditch the valley and make the scene in the Haight.  Soon they're blitzed on pot and Seconal, thumbing a ride north.  Along comes Cole, a "super-square" high school senior, who gives them a lift to Santa Barbara.  From there things devolve into a particularly long and gruesome Dragnet episode as the three teens descend deeper and deeper into the drugged world of hippie depravity.  Highlights include:

*Dorcie wrecking the car in a downer-fueled escape from the police.

*A hippie from Watts who calls himself "King Coon" and vacillates between ironic racial commentary and non-ironic self-loathing.  At one moment he's boasting that he plans to end racism by implanting his "supersoul sperm" into every white girl he can find to create a race of "niggerpiglets," the next moment he's lamenting that "black may be beautiful" but he most assuredly is not.

*Disgusting hippie crash pad with strung-out meth addict in the attic.  Dorcie later gives him a hot-shot that causes him to bleed out and die, so she burns down the house to conceal the evidence.

*Acid freak-out resulting in a series of disturbing pictures drawn on the wall with mascara and eye-liner.

*Dorcie offering to "run train" on a high school gym class in order to score some bucks for some more reds.

*Dorcie mainlining 15 Seconals on the beach at Caramel and almost snuffing it.

*Dorcie forcing Polly and Cole to engage in Peyote-fueled intercourse while she watches.  At the height of their "trip," she puts a gun into each of their mouths.

As you can see from the above summary, Dorcie is the source of most of the trouble here.  As the trip unfolds, Cole falls for the better-looking and blonder Polly; in fact, he only sticks around through most of this horrorshow to protect Polly and bring her back home.  Dorcie resents the intrusion and does everything she can to separate the two lovebirds and reclaim her original partner in crime.  Plus, as she becomes more strung out during her four-day binge on Seconal, pot, and acid, Dorcie basically becomes psychotic, culminating in her shooting her stepfather in the face and cutting his dick off.

The book is a bit over-the-top, and I still don't quite know what to make of the rapey yet ultimately benevolent "King Coon," but all in all Reds is a very compelling read.  Even if Thomas is working from the Jack Webb book of drug panics, he has a real knack for narrating how one charismatic teenager can completely screw over another, dragging her into a mess that she would otherwise have avoided.  A must for anyone interested in teen psychopathology of the early 1970s!
Email Post
Labels: 1970s golden state of mind hippies horror not bad-pretty good in fact pill-poppin' Psychosis teens