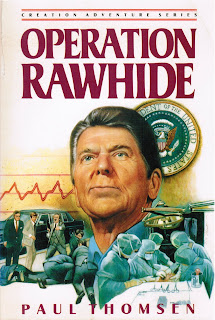 Conservatives love them some Reagen, that's a well known fact.  Here we have a book in the "Creation Adventure Series," described on the back as "gripping stories" that "introduce young people to the work of a sovereign God, from the beginning of time to now."  This particular gripping story tells us the story of Dr. Ben Aron, the surgeon who treated Reagen after the failed assassination attempt by John Hinckley, Jr. on March 31, 1981.  On the fateful day, we learn, Aron had just finished a marathon session of open heart surgery with another patient.  When he hears that "Rawhide" (Reagen's handle with the Secret Service) has been shot and is on his way to the hospital, he says a quick prayer and gets ready for his Presidential patient.  There follows an account of Reagen's arrival and the challenges of the surgery.

Mainly, however, the book is a vehicle for Christian testimony, the author's bio telling us the following:

Paul and his wife, Julie, have created Dynamic Genesis, Inc. and work full-time to produce books for the Creation Adventure Series of which Operation Rawhide is a part.  They also conduct seminars on how to teach children to answer questions on origins the way the public school textbook presents them and then 'qualify' their answers with a non-gradable Biblical scientific answer.  This 'qualifier' system has received enthusiastic approval from both teachers and students.

In other words, the couple teaches children to answer questions about evolution in the way that Caesar expects of them, but to add a "dinos walked the earth with man 4000 years ago" qualifier.  That's fine, I guess.  Every parent, religious or secular, teaches their children something dysfunctional and stupid, so who are any of us to get in the way?

What's odd (and yet typical), though, is the massively unchristian attitude the book takes toward John Hinckley, Jr.  Now you might think the Christian thing to do would be acknowledge that Hinckley was extremely ill, did something horrible, but should nevertheless be forgiven (which, as I recall, Reagan himself was magnanimous enough to do).  Author Thomsen, however, really, really wants you to hate Hinckley, forever and all time.  Here is the book's first mention of Hinckley: 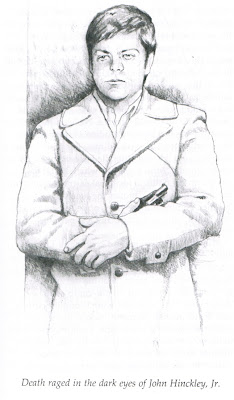 Death raged in the dark eyes of John Hinckley, Jr. At twenty-five years of age, this American citizen had been a member of the Nazi Party.

So right out of the gate, Hinckley's a Nazi. Not mentally ill, or even confused, or even perhaps spiritually lost--but a full-on Nazi.   But even that's not evil enough, so Thomsen goes on to remind us that the Nazis believed that "through time and chance, evolution would produce a superior race, and only the fittest would or should survive."  Get it?  The Nazis believed in evolution.  Do you believe in evolution.  You're a Nazi, asshole.

Nazi atrocities are then summarized, culminating in a reiteration of the major theme: "And now, forty years later, Hitler's same evil spirit was again rearing its ugly head through one John Hinckley, Jr.--a Nazi."  And more: The night before the assassination attempt "he left his hotel room and went out to pornographic stores, filling his mind with corrupting, lewd pictures.  His senses were dulled by drugs, pornography, hard rock music, and Nazi doctrine--with everything God opposed."  At that very same moment, we learn, President Reagen was experiencing "a sense of closeness, comfort, and love surrounded by the first family that evening" having "worshiped Jesus" earlier in the day.

More evidence for why we need two countries--one for secularists willing to fund mental health support and treatment, and one for those who continue to insist that both schizophrenia and Nazism are  things that simply "happen" because of a fundamental evilness lurking in the atmosphere.
Email Post
Labels: 1980s mind control musical evil politics Psychosis true crime