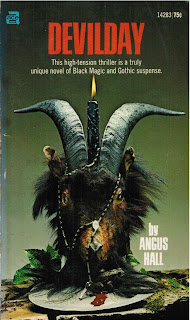 Billed as a "high-tension thriller" of "Black Magic and Gothic suspense," Devilday is more a British commentary on the circus of countercultural celebrity that occupied so many in late 1960s.  Barry Lambert is a low-level functionary at Southampton television, hoping to make it to the big time with BBC London.  His dreams will come true, promises his boss, if Barry will agree to serve as a personal assistant to an aging American actor, Paul Harvard Toombs, who has agreed to portray the mysterious "Dr. Dis" in a locally produced TV series.  Toombs, we learn from Barry's own personal memories, was once a prominent actor in Hollywood serials--but was fired and blacklisted in the late 50s after being implicated in the lethal sacrifice of a woman in a cave near Santa Monica.

With this Satanic vibe in place, we follow Barry and Toombs as Dr. Dis becomes an unexpected hit and attracts a legion of dedicated fans.  Backstage, Toombs is an unrepentant rake and drug addict who expounds a form of Anton LaVey-ish materialism.  When another woman is murdered in an apparent sacrifice, suspicion turns to Toombs.  From here Hall concentrates on the theatrics of media celebrity, something still novel enough in the late sixties to warrant sustained attention.  The police bust Toombs on a pot charge, allowing the aging thespian a platform to rail against England, the Enlightenment, and just about everything else on earth standing between him and his love of shooting Heroin and beating underage girls.

As we hurtle toward the inevitable bloody set-piece of an ending, Hall takes great pains to obfuscate the true source of Toombs' energy and personal magnetism.  Could be Satan, then again Toombs could be just an extremely hammy actor.  All in all a decent read, especially if you have an interest as to how the occult vibe of the late sixties might impact a smaller English metropolis.  The easy thing here would have been to make Toombs a "Brian Jones" figure, so placing an old American actor at Their Satanic Majesties Request makes for a welcome turn.

I'm assuming Hall was not a fan of Dr. Who, a constituency that is implicitly cast here as a legion of blind devotees willing to excuse the adventures of a lecherous, occult junkie so that their beloved show might continue.
Email Post
Labels: 1960s cults: real and imagined horror LSD media mystery occultism Paranormal Satan slightly disgusting TV UK