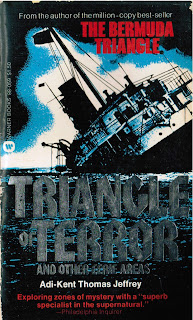 Back in the seventies, a few piper cubs and pleasure boats went missing around Bermuda and lead to the widespread speculation that some type of sinister psycho-fortean force was at work sucking planes and ships into the sea.  Hence, the Bermuda Triangle.  Adi-Kent Thomas Jeffrey (!) builds on this lore by relating other tales of geographic mystery and packaging them under the head-fake of the "triangle," even though none of the accounts actually involve any sinister geometry.  Here's what you get:

1.  The Indian Ocean cast as its own "region" of mysterious vanishings. Unremarkable given that the Indian Ocean is in fact an ocean.
2.  Storms and tenacious seaweed make for tough going on the Sargasso Sea.
3. Rumors of lost ships buried under the sand in the American southwest.
4. A place near Italy that, when the weather is just right, reflects images of ghost ships up in the clouds.  I'll go out on a limb here and say this is probably an optical illusion of some kind.
5. An island off of Scotland where everyone has ESP.  Everyone.  Which island, you ask?  Obviously you're not from there.
6. Various haunted boats found adrift near Sable Island off Nova Scotia.
7.  A place in rural Russia where some residents are said to be over 150 years old.  This was another point of Fortean fascination in the seventies, leading to a famous Dannon yogurt commercial featuring old Russian people eating Dannon yogurt.
8.  Assorted whirlpools and maelstroms.
9.  People killed by rains of stones and other unexpected projectiles from the heavens.
Email Post
Labels: 1970s fortean ghosties Inexplicable Paranormal sea-faring time-travel