About half-way into Black Belt Jones (1974), the titular "Black Belt" (Jim Kelly) and his partner Sydney (Gloria Hendry) need to infiltrate a mob-owned vineyard in order to retrieve a stash of photos and money.  All they need is an innovative plan to break through the Mafia Don's security system. 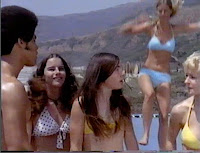 Jones approaches a quartet of trampoline enthusiasts that he has been coaching on the beach in Malibu.  After offering them $5000 a piece for their help, Jones begins an elaborate training session instructing each woman in an appointed task.  Many of these tasks appear to involve leaping. 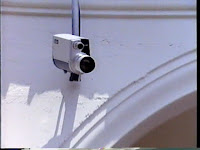 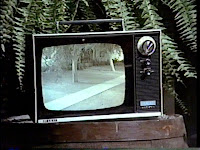 Arriving at the vineyard to carry out the mission, Jones motions toward a CCTV camera posted by the front door.

A cut to the interior shows the mobsters are monitoring the door through a television set, conveniently placed atop a keg of wine. They are also eating large plates of spaghetti. 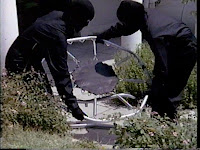 Jones and his team go to work.  First, a portable trampoline is deployed. 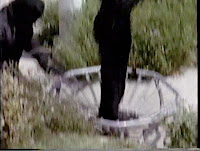 A third woman, equipped with a Polaroid camera, then uses the trampoline to leap to the exact height of the CCTV camera.

While aloft, she snaps a picture replicating the camera's
"field of vision." 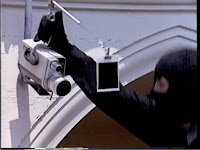 With the Polaroid developed, the woman attaches the photo to a specially designed brace.  Another leap on the trampoline and she affixes the brace + photo atop the CCTV camera. 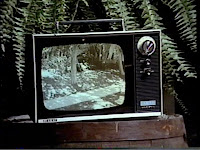 The Polaroid captures the "usual" view of the camera while simultaneously shielding Jones, Sydney, and the rest of the team from surveillance.

The wiseguys are none the wiser and continue to shovel spaghetti into their mouths. 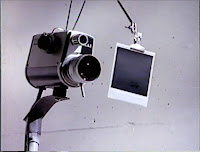 The plan is working perfectly...at least until a breeze begins to alter the position of the brace and photo. 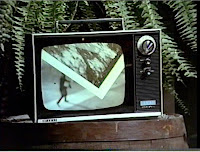 The mafia Don looks at his monitor and then looks away.  But something is wrong, and so he looks back to see the Polaroid now knocked completely askew and Jones running away in the "real" yard with a sack of money.