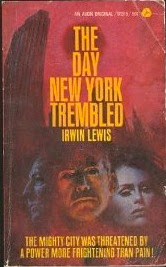 Milquetoasted professor is distraught when his friend and colleague from England drops dead while debating the origins of Etruscan civilization.  What looks to be merely another death chalked up to the hard living of university classics professors soon leads Dr. Milquetoast into international intrigue involving a new drug that makes people wholly oblivious to pain.  A Godsend, you say!  No!  Because, as we have seen on many documentaries about kids born without the ability to experience pain, they are in constant danger of dying from a ruptured spleen or a burst appendix since they have no way of knowing--through pain, sweet pain--that anything is wrong.  Whoever controls this formula, the professor learns, could put the entire city into chaos as people unexpectedly drop dead with no warning.  And wouldn't you know it, that's precisely what some evil folks have in mind.

For most of the adventure, Dr. Milquetoast is under the tutelage of the beautiful (but deadly!) Olga, a Natasha-like character who constantly has to save the Professor from various thugs, and whom Dr. Clueless comes to believe might have feelings for him.  But in the end she betrays him, and so the Professor must defeat the anti-pain terrorists with the help of his spunky young student, Ruth Stapleton, who we know is spunky because she is both fearless and constantly blowing wisps of hair off her face with an oh-so-sexy pout.  Together they destroy the formula and smash a mason jar of the drug before it can go into the NYC reservoir.... but Olga escapes.  Does she have the formula elsewhere?  Will there be a sequel?  Only subsequent trips to a garage sale will reveal the answer.
Email Post
Labels: 1960s academe drugs New Yorkitude pulp sci-fi