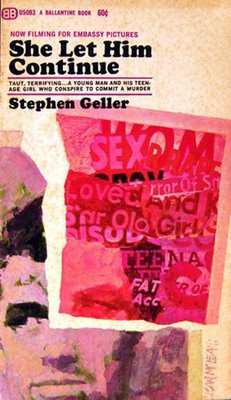 Dennis, a young arsonist on probation, moves to a small town, takes a job at a chemical factory, and then attempts to convince the 17-year old Sue Ann that he is actually an undercover C.I.A. agent.  Dennis appears to be wholly delusional, even borderline psychotic given that he once torched a church and a girl inside it, but he soon finds Sue Ann matches him marble for lost marble.  The C.I.A. charade leads to the two sabotaging the chemical plant and killing a guard (Sue Ann is all for it, one might even say "she let him continue...") which then mutates into a plan to take out Sue Ann' mother.

Reads very much as a Charles Starkweather/Caril Ann Fugate tale, albeit with a bit more bumbling on the male side this time around.  The paperback boasts the novel was (in 1966) "now filming for Embassy Pictures," which turned out to be the much better titled Pretty Poison (1968) starring Anthony Perkins and Tuesday Weld.  One suspects this was the goal all along as Geller's pacing and prose is as close to screenplay format as you can get.  Long sections printed in italics strive to explain what's going on in Dennis' head, but mainly this is a dialog driven tale of two teens who are very, very bad for one another.
Email Post
Labels: 1960s amok has ambition j.d. Psychosis teens