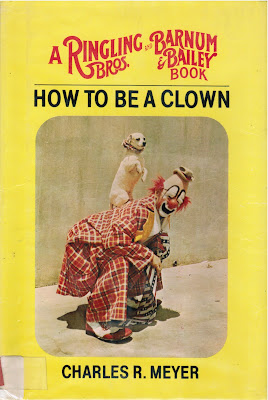 Okay, first thing you're going to need is a good dog, and by that I mean a good clownin' dog.  Let's face it, some dogs are funny and others are just real ass-draggers, like that jowly cartoon dog that used to be on TV mumbling all the time, so you're going to need one that is small, cute, and full of "Big Top" energy.  If the little shits in the back row can't see the dog is all peppy and happy to be jumping through hoops or whatever other shit you have in store for him, he's pretty much useless and I wouldn't waste any time on him.  Also, you got to take into account that the mutt is going to be climbing up your back for ten to twenty shows a week, depending on how much work your particular circus is seeing, so weight is important.  Anything over 12 pounds and you're just asking for the lumbago, take it from me.

So after you find a reasonably sized dog that isn't a complete moron, you're going to need to train him to run up your back and sit on his hind legs.  Now a dog, no matter how smart he is, doesn't have a natural inclination to just run up your back and stand on his hind legs while a few hundred corn-fed yokels are hooting, screaming, and throwing popcorn at you, so you're going to have to train him.  Two rules of thumb here:  liver treats and unrelenting fear.  That dog has to know you're in charge at all times, both in the ring and back in the trailer, otherwise he's going to do whatever the hell he wants when he wants to, and probably right in the middle of your act.  Sure, that still makes people laugh, but they'll be laughing AT you and not WITH you because your mutt just turned you into a sucker.  But remember, you may be a clown but no dog is ever going to make you a sucker.  Ever.   Make sure your dog knows that real good too.  Real good.

But you also gotta treat him nice or he won't do shit either, so it's a real balancing act.  That's where the liver treats come in.  I find that by stripping nude and putting a liver treat on every third vertabrae up my spine, I can get most dogs to jump me and crawl up my back in about a week.  Then you need a pal to hold one last liver treat way up over the dog's head until he learns to stand up on his hind legs.  Later the dog figures out you got that last treat stashed in your pocket, so he'll pretty much sit there forever until you fork it over to him.  Dogs are dumbshits like that.

If you got a "bad" dog, the best bet is just to get rid of him and start over with a new mutt.  If a dog screws over my act, I usually dress him up real cute and then push him out under the bottom of the tent when all the yokels are leaving to go home. Don't worry about it, I'm sure some kid will find him.  Sometimes though you get down to just one dog, so if he starts screwing up the act you may need to have the circus doc "dose" him up or down depending on just what his particular problem is.  That should last you a week or two until you can get a better dog.

Okay, getting the dog to stand on your back is a good 70% of clowning.  The rest of it is just funny clothes and acting like a moron.  Wish I could say it was more of an "art," but really it's just about loud plaid jackets and big shoes and spraying seltzer water on everything.  Oh yeah, you'll need some kind of make-up that makes little kids want to laugh and shit their pants at the same time.  If I don't see at least one kid crying by the end of my act, I consider it a total failure.  I've even followed them out to the parking lot just to make sure at least one of them NEVER forgets me.  As for the design of your make-up, who gives a shit, really?  Most clowns look pretty much the same.  My advice would be to go down to the library and just copy the make-up from some famous clown in the past.  It's not like any of that stuff is trademarked or anything, so you can pretty much paint yourself up however you want.

Now remember, not all clowns get to work the big venues right out of the gate, so be prepared to eat some real shit for a few years.  Birthday parties.  County fairs.  Traveling carnivals. Some rackets may even ask you to help put up and strike the tent at each show, or maybe work the corn-dog stand during off hours. Don't get all high and mighty about it.  Remember, your only skill is you can get a dog to stand on your back, so it's not like there ain't a thousand people who could replace you.  Just smile and do whatever they tell you to do--if you're any good, you'll be out of there soon anyway.  But no doubt about it, it can be a pretty God-awful depressing life for awhile, so don't be ashamed about bringing along lots of booze--you'll need it, believe you me.  Most clowns find that being a little drunk helps them perform better anyway.  Hell, I'd still have a couple of shots before each show even if I was screwing Barnum AND Bailey, if you know what I mean.

When you're just starting out, though, it's a good idea to have a few publicity shots you can hand out to line up some gigs.  As you can see from my picture above, the best thing to do is find a concrete drainage ditch of some kind and take a picture at straight-up noon, preferably on the hottest day of the summer.  The idea here is to have as drab a picture as possible so that when the circus boss actually meets you, you seem a lot more freakin' hilarious than you look in the picture.  Trust me.  If you have some fancy photo of you pulling scarves out of your ass in front of the Eiffel Tower, you're just going to disappoint everyone when you show up with your stupid dog-on-the-back act.  Lowering expectations is the key to becoming a successful clown.  That and staying the hell away from the Ringmaster's wife.

That's about it, really.  Like I said, the dog and the clothes do most of the work.  It doesn't hurt to know how to take a stage fall or throw a fake punch.