"Incivility in Hollywood is a threat to civility everywhere."
Martin Luther King Jr., draft of a Letter from Birmingham Jail, April 16, 1963
Thankfully, as the days pass--hour by hour, minute by minute--we are gradually healing from our most recent national trauma, a catastrophe that threatened once again to rip us apart as a people, pitting brother against brother, neighbor against neighbor, cable network against cable network.  After some heated rhetoric back and forth as to who was to blame, as well as calls for a more civil form of public discourse, we are only now beginning to put this tragedy into proper perspective.  Regardless of how we feel about this debacle in the future, however, I don't think any of us will ever forget the day Ricky Gervais took to the stage to insult some of our most vulnerable celebrities. 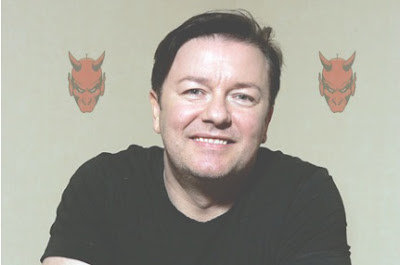 Only those who witnessed this bloodbath live on the air, as it happened, know the true extent of the horror Gervais' visited upon the Hollywood community.  It was clear almost immediately that the portly comedian planned to make good on his promise not to be invited back as host next year, hurling insult after insult at innocent millionaires who had come to the ceremony hoping for nothing more than a little praise, attention, and a gift bag filled with expensive chocolates and hair product that they might pass along to the pool boy.  As the cameras swept across the terrified crowd, each table of stars wondering who might be the next victim of Gervais' caustic abuse, Hollywood's bright and beautiful trembled like terrified children trapped on a bus with an insane driver, one who might at any moment turn around and tell a particularly sensitive child that his last diorama, the one depicting a couple of fugitives on the run in Italy, for example, was awful, simply awful.
Early in the evening, Gervais made a "joke" intimating that John Travolta and Tom Cruise, both known for their extraordinary efforts in promoting a Ponzi self-help scheme based on galvanic skin meters, ersatz Freudian topographies, the terror of Xenu, and a love of sailing, might be "gay."  The audience was dumbstruck, as if someone had taken a snow shovel and slapped them across their collective face.  Travolta and/or Cruise gay?  Who could think of such a thing?  It was a complete non-sequitor, so beyond the pale of everyday celebrity discourse that it could only have come from a completely deranged, unhinged individual.  He just as well might have claimed Lady Gaga was actually Dude Gaga, or that Kirstie Alley enjoys an In and Out Burger from time to time. 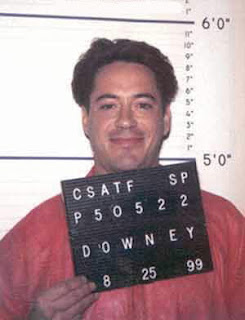 Later, Gervais dared to make a joke at the expense of Robert Downey, Jr., pointing out that Downey was, for a time, a drug addict, and that his hijinx during that period were often hilarious.  And they were!  One time Downey was arrested for breaking into a neighbor's home and falling asleep in a bed. In another escapade, police arrested him for speeding down Sunset with cocaine, heroin, and a handgun in his car.  Still yet another time he was found wandering barefoot in Culver City.  Culver City!...the most hilariously unglamorous of L.A. neighborhoods.  I'm sure it was just too tempting for Gervais to remind us of these earlier shenanigans in that they were, as comedians say, "comic gold."  But what Gervais rudely refused to recognize is that Downey Jr. did his time for those drug-related transgressions, serving an entire year of a 3-year sentence at California's State Rehab Facility at Corcoran.  And even though he was mysteriously released early and went right back to a lucrative acting career, I'm sure even the un-famous, un-lawyered drug addicts from Compton and Watts-- residing in the regular non-rehab Corcoran Prison next door--were cheering him on as he left to return to fame and fortune in Hollywood.  One can almost see them staring through the bars of their cell windows, tears in their eyes.  "Make us laugh, Robbie, make us cry.  Do us proud. And don't let any snotty British comedians steal your joy!"
Later at the ceremony, Downey, Jr. fired back at Gervais, "Aside from the fact that it's been hugely mean-spirited with mildly sinister undertones, I'd say the vibe of the show has been pretty good so far, wouldn't you?" Everyone cheered, happy at the chance to reaffirm their selfless love for one another and their collective investment in maintaining a good "vibe" at all times.  I have to admit that a small tear came to my eye as well here, seeing a star who has maximized his second-chance at critical and commercial success taking the bull by the balls and not letting a minor joke at his expense go by without a proper response.  Lesser men would have ignored Gervais's jibe, or perhaps themselves made a self-deprecating joke about their chequered past.  But not Downey.  Iron Man indeed!
But the biggest victim of the night proved to be Tim Allen, appearing alongside Tom Hanks as an award presenter.  Gervais' introduction went thusly:  "What can I say about our next two presenters?  The first is an actor, writer, producer, and director, whose movies have grossed over 3 and 1/2 billion dollars at the box office. He's won two Academy Awards and Three Golden Globes for his powerful and varied performances, starring in such films as Philadelphia, Forrest Gump, Castaway, Apollo 13, and Saving Private Ryan.  The other...is Tim Allen." 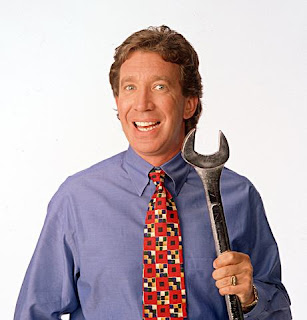 How dare anyone make a joke at Tim Allen's expense.  Allen's sitcom, Home Improvement, was one of the most popular shows of the 1990s, and while his movie career has been less than stellar since then, he has found a real niche providing his wholly unique and irreplacable vocal talents to inanimate objects in a series of successful Disney cartoons.  Some might say that a ten year run on a top-rated sitcom is more than most achieve in life, both in terms of fame and money, and that anyone so fortunate should remain eternally grateful even if he or she were to never work again in the entertainment industry.  But gone forever now are the harsh days of the studio system when bloodless financial managers decided, by means of box-office returns, whether or not an actor had any future left in the industry.  Hollywood is now a truly egalitarian fraternity.  Once brought within the gated community of fame, you will never be asked to leave, but will instead be afforded continuing respect and endless opportunities for additional projects in the future.  Tim Allen's resume may not be on a par with Tom Hanks' yet, Mr Gervais, but I'm sure given enough decades of opportunity and our continuing support, he will one day find another vehicle worthy of his talents.  I look forward to seeing him at award shows well into the distant future until senility either renders him oblivious to his surroundings or me oblivious to his identity.
Like Downey, Hanks and Allen were not going to let Gervais ruin the evening's hard-fought vibe of self-congratulatory self-importance.  "We remember when Ricky Gervais was a slightly chubby but very kind comedian," said Hanks, setting up Allen for a completely unrehearsed ad lib, "Neither of which is he now."  Here, I think, Hanks and Allen stood on the side of the people, deflecting Gervais' classically structured, snooty, comedian's-comedian joke with a good old-fashioned schoolyard retort, "Ricky Gervais is mean and fat."  It was a devastating counter-attack, especially delivered in a room crammed to the rafters with so many beautiful, humble, selfless, and talented people, rather like throwing the kid with all the pimples and an asthma inhaler into the pool at a cheerleader's house party.
The Golden Globes have already announced that Gervais will NEVER be back to emcee the affair (well, for now at least).  I think the overall problem here can be pinned on Gervais growing up in the extremely class-conscious environment of the U.K.  There, nothing is funnier than seeing a posh sloane, an Oxbridge grad, or even a royal exposed as a doddering dimwit who enjoys immense power and wealth for no other reason than a certain sperm swam faster to a certain egg.  In the U.S. mindset, however, and especially in its most arch Hollywood iterations, the delusional dream that one is always on the verge of fame and wealth means that your "betters" should be afforded a certain deference, awe, and respect.  Who knows, one day you yourself might be a mediocre stand-up comedian, ten years past your glory days on a commercially successful but critically ignored sitcom, and you'll want Tom Hanks to have your back too.
Email Post
Labels: Celebrity Bullshit Commerce England Intentional Comedy The TV