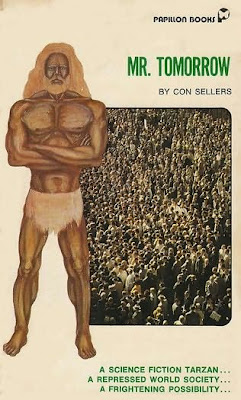 Imagine for a moment, if you can, if you DARE, that Wilhelm Reich, halfway through writing The Mass Psychology of Fascism, decided to take a break and write a quick parody of Ayn Rand writing a sleazy pulp.  If you can keep those various variables and transmutations straight in your mind, then you might have a glimmering of the madness that is Mr. Tomorrow.  And if you ever read Mr. Tomorrow, you might further understand why all conservative men are so gay for Reagen.

Replace muscle-man on the cover here with Hitler and you would have a fairly workable cover for Reich's book as well--the dominating father of the "mother-land" standing in authoritarian dominance over a mass desperate for moral and political order.  Who is this giant of a man, this Mr. Tomorrow?  Well, that's our story.

Way back in 1936 (mark that date well), the great patriarch of the Adams clan decided that the government had become too oppressive and was taking away man's fundamental liberties.  His regressive fantasy solution is one near and dear to the Republican mindset even today--Adams moves his entire family into a well-appointed cave on a mesa somewhere in the American west, stocking it with provisions, "great books," and, of course, lots and lots and tons and tons and piles and piles of sweet, sweet guns.  As the novel opens, many years later, Adams' grandson Jon (the man-meat on the cover) is the last of the line, and he feels a certain stirring in his loins that tells him the time has come to emerge from his lair, go among the populace, and find a woman to quite literally drag back to his cave (a luxurious one, to be sure, but a cave nevertheless).  So off he goes, down into the city.

Meanwhile, we meet the man who will become Jon's mortal enemy:  Tor, a high-ranking "bureaucrat" near the top of the Department of Genetics.  Already a powerful man in the all-intrusive Federal government, Tor has ambitions to go even higher.  In the meantime, he amuses himself by strolling among the citizenry in search of women to rape.  But not just any woman will do.  Tor only wants to rape the daughters and wives of merchants who have refused to participate in the government's 51% ownership plan.  Raping these women not only makes a powerful political point about resisting the government, but Tor finds only these women have the fierce independence to fight back and make the experience satisfying.  And that's the crux of the book's politics.  The government, any government really, that would dare tax you in any way, shape, or form--that would do anything to intrude upon your right to sit on a pile of rifles in your cave--is literally akin to a rapist.

After the rape, by the way, daughter, wife, and father/husband are typically banished to the land of the "Inalis," a horrible realm of poverty and servitude.  "Inali," we later discover in true Star Trek "Yang vs. Komm" form, is short for the "Inalienables," as in those who demand their "inalienable rights."

But luckily for the meatheaded reader of this crap, there is Jon the meaty man working overtime as a one-man resistance army.  Once in the city, his very presence creates such a crisis that he ends up killing 15 government men in one night with only a bow-and-arrow.  Thus begins a long chase and escape narrative between Jon, still shopping for women, and Tor, who realizes capturing the now notorious mountain man will give him tremendous political advantages in the upcoming elections. 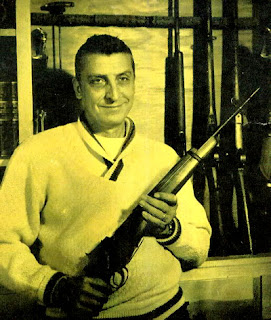 Throughout the rather pedestrian man-on-the-run-from-the-oppressive-state story, author Sellers finds plenty of time for outright Randian/fascist crapola.  Here are a few choice nuggets:

"Some men don't want to be 'equal.' Some men don't want enforced serenity.  We want to work our own way, in our own time, for things we consider important--not because some bureaucrat tells us what to think is important...Any man who takes a share of what I alone have earned is a thief, and the 'laws' that protect him are made by even greater thieves."


"A real man wanted only to be left alone by all authority, to be neither taxed nor pampered.  The only government he should rightly desire is that which protects him, and all men, from force by another man or group of men that would stop him from living his own life."

How, you might ask, would such a sensibility handle the requisite sex scenes in a sleaze pulp.  Not very well, it turns out.  In keeping with Reich's "invasion of compulsory sex morality," Jon Adams--though a 25-year-old virgin living alone in the mountains--will not deign to have sex with just any woman (unlike his rapey G-man adversary).  No, Jon is searching for the special "one" woman to be his life-mate.  This leads to rather hilarious episodes in which Jon, irresistible in his man-meatliness to the decadent women of the city, must go to superhuman lengths to resist the urge to copulate.  In one particularly amazing spectacle of sexual restraint, Jon is chained to a wall "King Kong" style, injected with a powerful aphrodisiac, and then veritably molested by two beautiful "pleasure girls."  But he will not yield, God bless him, and true to Kong rips his manacles from the wall and escapes before anything untoward happens! 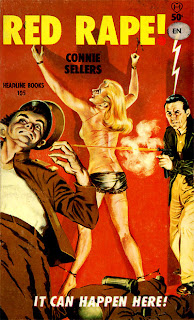 If you enjoy searching for odd literature, Mr. Tomorrow is precisely the kind of novel you both hope and dread to find.  The hope resides in encountering aesthetics and sensibilities that are strange, incomprehensible, and perhaps even wondrous.  The "dread" is in realizing that the reactionary mind, forever seeing itself as cornered like a wounded wolverine, appears to be a vestigial part of our reptile wiring that we simply cannot shake as a species.

Despite the suspicious name, "Con Sellers" was in fact a real person--and a real right-winger.  His papers are even available at the University of Southern Mississippi if you want to research his career (and someone should, if they have the stomach for it).  Sellers' career, starting after his stint in the Korean War, ranged from short stories in Men's magazines of the '50s, sleazy pulps of the '60s, and later more mainstream action-books in the '70s and '80s.  And Mr. Tomorrow, apparently,  is not the only book in Sellers' oeuvre that is so profoundly over the top in its naked politics.  Interested readers should check out this excellent account of another title, Red Rape, at Conelrad.
Email Post
Labels: author demonstrably insane conspiratorial kickers of ass mind control pulp sci-fi Sleaze wingnuts