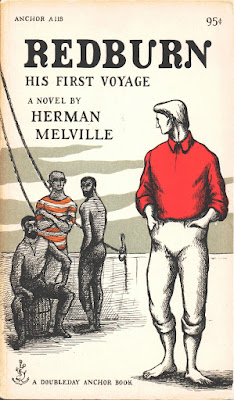 Herman Melville
Harper and Brothers
Depressed young man makes a trial run at Moby Dick.  Discovers quickly that sailors are generally assholes and that life on the sea is harsh and disgusting.  Eventually makes it to Liverpool which is also found to be harsh and disgusting.  Wanders around for many pages in search of an England that matches his imagination of the place, but generally only encounters squalor and drunkenness.  Various scams run on sailors are outlined.  Extensive descriptions of antiquated food and drink (like "swipes," apparently the rinsing from inside a beer barrel).
Although often grim, there is also some great comic writing.  For those who think facetious snark is an invention of the 20th/21st centuries, observe Melville describing the fate of a young sailor, prematurely gray, who puts his faith in a couple bottles of patent medicine bought along the docks:

I saw both bottles; and on one of them was an engraving, representing a
young man, presumed to be gray-headed, standing in his night-dress in
the middle of his chamber, and with closed eyes applying the Elixir to
his head, with both hands; while on the bed adjacent stood a large
bottle, conspicuously labeled, "Balm of Paradise." It seemed from the
text, that this gray-headed young man was so smitten with his hair-oil,
and was so thoroughly persuaded of its virtues, that he had got out of
bed, even in his sleep; groped into his closet, seized the precious
bottle, applied its contents, and then to bed again, getting up in the
morning without knowing any thing about it. Which, indeed, was a most
mysterious occurrence; and it was still more mysterious, how the
engraver came to know an event, of which the actor himself was ignorant,
and where there were no bystanders.

After six weeks in Liverpool, the crew turns around and goes home, this time with 500 or so Irish-folk who quickly get "the fever."  More appalling scenes of death and horror.  Back in New York, our hero gets screwed out of his wages.  Loses touch with his British pal after the trip back and later learns he was crushed to death by a whale.
All in all a good read, although thinking so makes you a schmuck in Melville's opinion.  He said of the book:
"I, the author, know [it] to be trash, & wrote it to buy some tobacco with"
_____________________________
Fun Fact: The Doubleday Anchor Edition from the '60s (above) features cover art by Edward Gorey.
Email Post
Labels: 19th Century legitimated sea-faring