I apologize if anyone was offended by my previous post.  I should never have suggested that nutjob Jared Lee Loughner's paranoid ramblings about the Federal government, the Gold standard, secret messages in U.S. currency, or the precarious state of the Constitution had any influence whatsoever on current Republican propaganda techniques.  I'm sure the GOP thought of "Death Panels," "Birtherism," "the Obama bullet shortage," FEMA concentration camps, and other truly outstanding schizoid memes completely on their own with no help at all from non-professional paranoiacs.  In the newfound spirit of bogus unity that demands no one make the GOP feel bad for having cynically integrated weaponry and conspiracy theory into their recent political strategies, we'll move on here to what people have come to expect from this site; namely, the more oblique politics of popular crap. 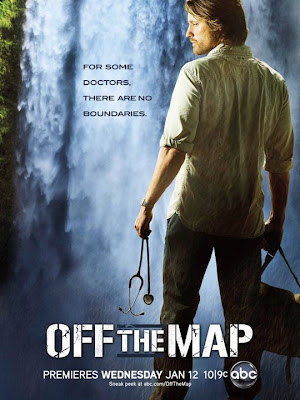 So, there's a new sexy doctor show on ABC called Off the Map.  Haven't seen an episode yet, but I have been confronted at almost every bus stop by this contemplative young doctor staring at a waterfall (or more unnervingly, at us as we approach from behind). Here's what I do know about the premise: It's about a free clinic in a remote and impoverished South American village (although I understand the cast will later roam to other "off the map" locations, or at least "off the map" according to the entertainment industry).  In the first episode, a new group of volunteers arrives at camp and meets the clinic's director, described thusly in ABC ad copy.

They’re introduced to the legendary and enigmatic Ben Keeton, who was the youngest Chief of Surgery at UCLA but who walked away from it all to found the clinic.

Given this tidbit of narrative information and the generous photo clue of the brooding young man (who we must assume is the "legendary and enigmatic Ben Keeton"), let's play that always diverting pre-premiere game: "What's the backstory?"

Okay, let's start with "youngest Chief of Surgery at UCLA."  Young, obviously.  Driven.  Freakishly talented.   But something is missing.  I would think being Chief of Surgery at UCLA would be an extremely rewarding job regardless of your age. You're at the forefront of medicine in one of the most prestigious medical programs in the nation, working on techniques and technologies that will eventually save thousands of lives around the world--probably far more than you could by packing a duffel bag and wandering out into the jungle to "touch the natives."

So I'm imagining here we'll go for some kind of fake crisis around Hollywood privilege and superficiality--perhaps his disgust at doing yet another boob job on a Karadashian-like celebutard.  Or maybe something really over the top--a fight with the higher-ups over allowing cameras into surgery to document the frantic last-minute attempts to save mega pop-star "Micheal Waxson."  You're turning this hospital into a freakshow! he'll yell, just before ripping off his I.D. badge and storming out the door.  He gets into his Ferrari and drives straight to LAX, never looking back.

Then again, maybe he's happy with his job and he's leaving town because of...a haunting failed relationship.  The woman who dumped him in Med School for a less accomplished doctor.  Or maybe his fiancee who died in a plane crash or insurgent firefight while doing volunteer medical work in the Middle East, thus inspiring the "youngest Chief of Surgery at UCLA" to continue in her footsteps, giving up his chance at an easy lifetime of A-list appendectomies so that he might "find himself" in helping those less fortunate.

The hair and beard are more difficult to read.  Is he an example of "authentic" un-self-conscious masculinity or is his scruffy face hair and coiffed-to-seem-slightly-tussled haircut a residual marker of L.A. douchebaggery? Or is it both, as in Hollywood's best guess as to what a young doctor "roughing it" beyond the salon might look like?   Something here says this character is originally from the East coast.  I'm thinking born in Maine, somewhere remote, and then on to Harvard Medical School. Top of his class. Etc.  Still has a bit of the winter mountain-man in him, even though he now circles the equator on his mission of mercy.

He probably has some other baggage as well.  Maybe his father never lived to see his success, but died of a massive heart attack when Ben was still a troubled teenager, hauled into juvenile court once again for poaching local lobster traps.  Somehow Ben feels responsible, and dedicates his life to medicine...but nothing can erase the guilt.

The waterfall also demands our attention.  This suggests to me a certain "spiritual" vibe to the show.  In addition to helping the destitute, Ben and his staff will also gradually come to see the beauty of the world--even amidst spectacles of profound suffering.  Maybe Ben Keeton, the youngest Chief of Surgery at UCLA, begins as a hardened atheist with no-time for sentimental fairy tales, but in his mission to heal, arrives at a higher "Lost-like" truth.

Holding a stethoscope in one hand and what looks to be a distressed Urban Outfitters satchel-bag in the other is a wonderful emblem for the show, as if Ben Keeton has just made a difficult landing in a jungle clearing, but is now going forth with all he owns--a change of clothing and his trusty stethoscope--to seek out the sick and injured.

Finally, and most enigmatically, we have the sideways backwards glance.  Is he in the process of "turning his back" on his privileged past?  Are we assuming the subject-position of the one woman who has a chance to break through Ben's heavy emotional armor?  Is he challenging us to follow him, to join him in a mission of global humanitarianism?  Hard to say.


Yes, solving the mystery of Ben Keeton promises to be the heart and soul of Off the Map, and I, for one, can't wait to avoid his journey of professional, emotional, and spiritual discovery.