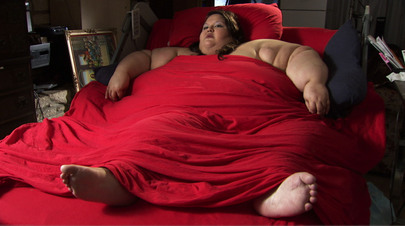 Industry watchers were somewhat perplexed in the fall of 2006 when the The Learning Channel (TLC) appointed Waylon "The Snake" Fenton as head of program acquisition.  Perhaps they had little choice.  Associated primarily with documentaries about wars that happened before the invention of motion-picture photography that could only be rendered through voiceover and slow-dissolves of book illustrations,  TLC entered the new century facing a re-branding crisis as the competition for digital eyeballs grew steadily more intense.  No one likes to "learn," after all, especially when everything worth knowing is already available on the Internet with a few simple keystrokes.  How then to keep a precious footprint on the cable tier profitable in a new and by all accounts stupider millennium?

Enter Fenton, one of the more colorful if lesser known figures in the television industry.  From 1970 to 1977, Fenton ran the last remaining "freak show" on the southern carny circuit (where he earned his reptilian nickname--occasionally playing the role of the "Snake Man" when another performer fell ill).  Fenton put this experience to good use in writing his bestseller of 1985: The Geek Inside: It's Normal to Feel Abnormal.  Television deals followed, leading up the corporate chain to his current post at TLC.

The recent holidays proved an excellent opportunity to review the immense changes Fenton has brought to the network, TLC bundling many of their most popular series into day-long "blocks" that allowed fans and first-time viewers alike the chance to review an entire series well in advance of the July Emmy nominations.

First up were the vaunted "Half-Ton" shows, a series of programs focusing on people who weigh around a "half-ton" (that would be 1000 lbs).  Having a fourth digit in your weight class apparently earns you the designation of "super-morbidly obese" (America's fastest growing category of obesity, I accidentally learned by watching the show).  These are individuals who through some diabolical combination of genetics and bad habits (the exact ratio is still open to dispute) become so tremendously huge that they eventually can no longer leave the house, making it impossible for them to find even decent "sideshow" work.  No worries, though, as documentarians are apparently waiting in line with saws, axes, and forklifts to cut these individuals out of their bedrooms so that they might be photographed for our horrified amusement.  When Jerry Springer did this two decades ago, it was an outrage.  Now it's a franchise.

Rather than take this as a symptom of a culture in decline, as many haughty elites would do, I think we should celebrate our increasing comfort level in acknowledging how enjoyable it is to stare at people who look very different from us, preferably in ways that flatter our own sense of normative restraint in backing off from the KFC Double-Down, Hardee's Monster Thickburger, and other things consumed by uneducated poor people not in our premium-package cable demographic.

Mercifully, most of the "Half-Ton" shows (Half Ton Mom, Half Ton Dad, Half Ton Son, etc.) take place at the hospital.  Incredibly, the super-morbidly obese are generally too gigantic to qualify even for gastric bypass surgery, necessitating a preliminary procedure where three to four hundred pounds of pure, unadulterated body fat must simply be carved off the body in gigantic bloody swathes--captured here in detailed close-ups by the "Half-Ton" film crew as calliope music plays ever so lightly in the background. 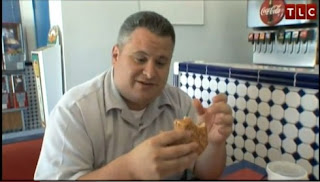 Next up was "Freaky Eaters," a series that captures the plight of those poor souls driven to eat things that one should not eat, or addicted to eating bizarrely huge quantities of things that are otherwise putatively normal to consume.  Here Fenton and TLC had help from, of all places, BBC-3, which produced the first-run of this series for the United Kingdom.   In the episode I sampled, a 34-year-old man was "addicted to cheeseburgers," meaning he generally would eat only cheeseburgers.  Moreover, the "addict" could only eat his cheeseburgers if they had no lettuce, tomato, or onion on board, thereby making them as absolutely unhealthy as possible (here, though, we verge more toward fetishism than addiction, or perhaps the fetishistic side of addiction).  Part of the addict's "therapy" was to entertain the idea of eating a cheeseburger WITH lettuce, a prospect that rather poignantly almost made him break into a full-on panic attack, thus demonstrating that his addiction was less about food going "in" than some strange trauma associated with the food that was going "out" back when he was a toddler. I was sincerely hoping for some footage of the man cutting to the chase and actually screwing a cheeseburger, but so far at least, TLC has decided not to go down that road. 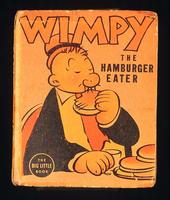 In the 1930s, Wimpy's famous addiction to hamburgers taught everyone an important and empathetic lesson about the humiliating failures of capitalism.  His familiar phrase, "I will gladly pay you Tuesday for a hamburger today," was the sad refrain of a man, broken by the Depression, who the reader knew would never "pay on Tuesday," but nevertheless maintained the social charade of gentlemanly honor in his destitute freeloading.  Trapped by historical circumstances beyond his control (as are we all!), Wimpy valiantly performed the class position to which he either formerly belonged or tragically aspired.  In "Addicted to Cheeseburgers," however, heartstrings are pulled more by appeals to lifestyle embarrassment, especially as the man's surprisingly hot wife begs him to quit eating cheeseburgers before he ends up on Half-Ton Husband.  While many would blame the fast-food industry for such a compulsion, I think programs like The Flintstones, King of Queens, and Family Guy must also be held responsible for propagating the idea that women, especially sexy redheads, are irresistibly attracted to men sporting large folds of belly fat, which in the inexplicable logic of television comedy, somehow translate into boyish charm and wit. 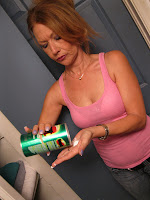 And now this week TLC debuts My Strange Addiction, a series that promises to introduce viewers to individuals who allegedly cannot give up an array of bizarre and disgusting behaviors.  But Fenton may have gone to the freak well one too many times on this one.  Some of these "strange" addicts do indeed appear genuinely if only mildly disturbed ("Kesha," we are told, is addicted to eating toilet paper--odd, perhaps, but is it really any worse than eating Wonder Bread?).  Others, meanwhile, are trading in outright bullshit.  For example, one woman claims to be addicted to eating laundry detergent and other household cleansers.  Her publicity photo shows her enjoying a quick line of Comet.  Her name?  Crystal.  Yeah, right.  It's like finding someone addicted to cough syrup named "Smacky." 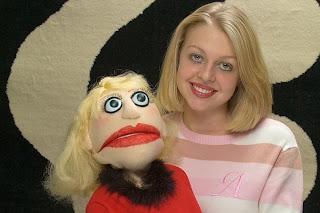 Even more forthright in the bullshittery is "New York comedian" April Buckner, who claims to be "addicted" to ventriloquism and thus cannot leave the house without her various puppets.  In the Kaufmann/Skaggs era of media hoaxing, this might have been a brilliant gag--convince an idiotic TV producer that you have an idiotic addiction to idiotic ventriloquist puppets.  But sadly, April's addiction would appear to be more a case of both producer and talent understanding they need one another for mutual advancement.  TLC needs freaks, lots of 'em.  And Buckner needs that big break that will allow her to become the next Jeff Dunham.   Unfortunately for both, a person who refuses to go anywhere without a ventrioquist dummy can only be one of three things: a). a desperate comedian; b). an "outrageous" performance artist, c). an asshole.  And yes, I recognize that one can be all three at once.

I think TLC has buried the freak-lead with Ms. Buckner.  Wouldn't the more compelling show be, I Still Want to Practice an Entertainment Form that Peaked in the 1930s and That Most People Now Find Incredibly Annoying?   Or perhaps the "meta" approach is more appropriate: I Want to Become Famous by Disguising My Mediocre Abilities in Ventriloquism as a Freakish Addiction that Will Land Me on Reality TV Even Though Everyone Watching Knows It's All a Tactic Which, Hopefully, In the End, Will Nevertheless Make Me of Some Moderate Interest for Three or Four Weeks.

No time, alas, to go into detail about TLC's other big projects this past year, Sister Wives and Sarah Palin's Alaska.  Suffice it to say that both exploit freakish clans that value odd iterations of Christianity and unchecked propagation above all else, and that of the two "stars," Cody would make a much better president.
______________________

A quick check of the net reveals that the TLC / Freak show meme has already been out there for awhile, perhaps most notably here.  Kudos to those more alert canaries in the coal mine of crap, and my apologies for picking such low-hanging fruit...but really, addicted to ventriloquism?  How much more shit do you expect us to eat in the name of "entertainment," TLC?
Email Post
Labels: Bio-Horror Exploitation Rapid Ingestion Sleaze The TV