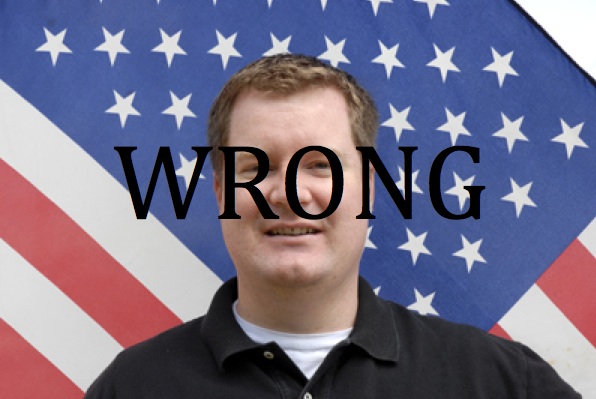 After the President's State of the Union address last night, CNN tossed to the Wolfman for the standard lightning-round of pundit reaction.  One of the issues the President had addressed was a need for the government to partner with private industry so as to invest in advanced research and refurbished infrastructure (and seriously, have you landed at an American airport recently?).  But Erick Erickson, mastermind over at Red State.com, was having none of it.  Calling the government's involvement in constructing the Interstate highway system at mid-century an "anomaly," Erickson argued that America's greatest inventors (Edison, Bell, etc) had been products of the private sector alone and didn't need or want the government getting in the way.
Sigh.
I know CNN wants to tap into some of that sweet Fox revenue stream, an empire based wholly on delusional readings of a world that--if it ever existed--certainly does not exist now.  But honestly, how low is the bar set now for finding a conservative pundit to bring the "fuck progress" perspective to every debate?  Consider the following facts, any of which Erickson (who makes a living in the telecommunications industry) could glean with just an hour or so of reading:
*In the 1840s, Samuel Morse applied for Congressional funding to develop the telegraph.  Initially denying a grant (as no one could understand what the telegraph would actually do), the government later stepped in to help Morse construct the first working telegraph line between Washington D.C. and Baltimore, thus beginning the modern age of electronic telecommunications.
*Bell and Watson may have "invented" the principle of the telephone without government help, but the main reason nearly every U.S. citizen in the 20th century eventually had a phone in their own home was because the government negotiated protected monopoly status for AT&T.   While no one is necessarily nostalgic for the days of "Ma Bell" (which lost its monopoly hold beginning in the 1980s), the almost century of public/private utility status enjoyed by the company allowed AT&T (and yes, the government) to standardize and expand the nation's telecommunications infrastructure to all 50 states.  The "revolution" in the privatization of U.S. telecommunications would largely use that very same infrastructure.
*After the government returned control of radio (then called "wireless") to private industry following WWI (having taken over briefly for "security" purposes), the corporate interests involved in the fledgling industry practically begged the Federal government to intervene once again in order to set technical standards, adjudicate issues of signal coverage, and to mediate thorny disputes among the various patent holders (who all needed to cooperate in order for "radio broadcasting" to exist).  Thus did the government play a major role in establishing commercial broadcasting.  In fact, the Federal government was instrumental in creating RCA in 1919 and continued to stuff it with R&D money for much of the century.  RCA--NBC--television--hello?
*In the earliest days of Cable TV (an industry that now pays at least a part of Erickson's salary), commercial broadcasting interests fought like hell to restrain the new cable concerns from distributing original content--channels like the eventual CNN (in the 1960s and 70s, "cable" was only allowed to bring existing broadcast stations to remote communities).  It took the courts to open up the cable market as we now know it through what came to be called "The HBO Decision."
*And I've heard a rumor that the Interwebs, the home of Erickson's other business concern at Red State, had something to do with the U.S. military--but surely I must be mistaken.  I'm sure the Internet was actually invented by a lone genius in Idaho flying a "Don't Tread On Me" flag over his cabin.
*For good measure, let's also throw in the government's intense investments in "rural electrification" during the 1930s, without which the very "Red States" Erickson claims to speak for would still be using yodeling and smoke signals as their primary means of long-distance communications.
I expect the pundits on Fox to be gleefully ignorant and ill-informed, in fact they've made a rather hysterical art of it.  But come on CNN, surely you can find a right-leaning pundit more in touch with the reality-based community, one not so amateurish as to simply make up crap about entire areas of expertise that are obviously beyond his experience, knowledge, or even, sadly, his curiosity.
Email Post
Labels: Commerce Computin' Conventional Politics Deadish Media Just Depressing Magical Thinking Post-Analogue Reality Regional Conflicts The TV Valuable Advice to the Culture Industries