One of the oddest things about '60s smut is just how utterly conventional the "plots" turn out to be.  Despite promises on the cover that a book will interrogate a hidden world of licentious abandon beyond the normalizing structures of everyday society, such "transgressions" rarely translate into a similar disruption of genre or form.

Case in point: The Sex Persuaders.  Author Trainer frames this in the "subliminal seduction" panic still particularly active in the mid-1960s, the idea that unscrupulous individuals (most likely advertisers) might place "secret" messaging in commercials that force you to buy the product. 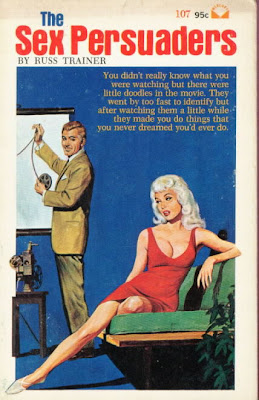 Protagonist "Trump Hadley" has access to just such a system, ESP-ER, a series of curious "doodles" that when superimposed onto a film image can drive any number of desired behaviors--including, obviously, instantly transforming the most guarded, prim, and virginal women into raging she-cats of desire.  As we open, he's pitching the system to an ad firm in the hopes of selling it for a Dr. Evilish $1,000,000.  But it needs to be tested in the field first, and so Hadley and the firm's beautiful young head of research, Lisa Manning, fly back to her small home town to conduct some "research."

Before they leave, however, Hadley tries the system out covertly on an attractive secretary he sees working in the office after hours.  It has the desired effect, and soon the two are on the floor in passionate embrace.  Afterwards, however, when the woman ceases to be under the influence of ESP-ER, she realizes she's just lost her virginity to a complete stranger and breaks down in tears.  I mention this little episode only because it seems such an oddly moralistic critique of the fantasy the book purports to offer: instantaneously manifested sexual opportunity free of any other "complications."

Once in Lisa's home town, the book slips into its smut + (blank) generic rendezvous; in this case, the small town cross-class melodrama typically associated with Peyton Place.  Lisa used to have a boyfriend named Wade who came from a rich family.  The parents forbid him to see her and made him marry a "frigid" aristocratic type instead.  Lisa has "revenge" sex with Wade at the lake, just like old times, so as to show him just what he missed by dumping her.  Trump, who by now seems to have feelings for Lisa, allows himself to be entrapped by Lisa's little sister, Bonnie, who wants to be taught the "ways of love" by a "real man" from the city.  He does it, but hates himself for it.  Later, to get sex revenge against Lisa (for hooking up with Wade), Trump decides to use the ESP-ER system on Wade's "frigid" wife.  It works, but not as Trump had hoped.  Driven mad with desire by the subliminal messaging, the so-called frigid wife instead seduces their French maid.  She's not frigid, she's a lesbian!

And see if you can follow this:  Lisa allows Trump to show her a film with ESP-ER as an excuse to seduce him, but when he's out of the room, she "erases" the ESP-ER but pretends it worked anyway.  Afterward, Trump feels so bad about using the technology on her that he decides to destroy its secret and leave town...but Lisa reveals that she erased the film before its "effects," thus demonstrating that she and Trump have a natural, non-subliminally-induced attraction for one another.  Marriage to follow.

Tralins would later go on to write many sci-fi and occultish books under his own name.  In this early book, like so many other authors who started in the smut racket, you really feel for their dilemma--hoping to learn and/or improve in the basic craft of popular story craft, and yet having to stop every twenty pages or so to incorporate the requisite sex scene.
Email Post
Labels: 1960s mind control Sleaze