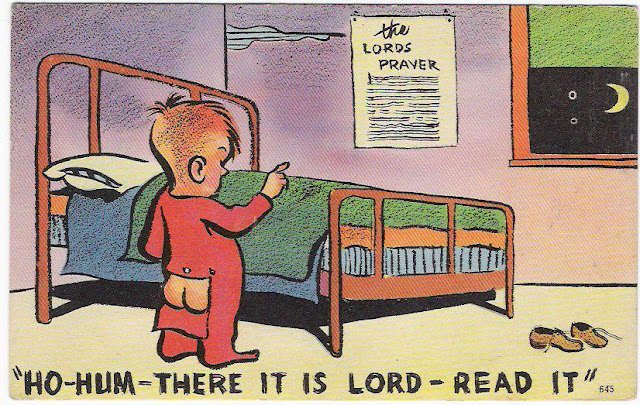 I found this postcard recently at a flea market (in the same stack that yielded "Hillbilly Shits in Phonebooth").  Disguised in the cutesy "out-of-the-mouth-of-babes" logic so often encountered in the greeting card sensibility is a shockingly candid image of religious rebellion.  After months and years of repeating the Lord's prayer by rote, Little Johnny has apparently finally figured out that this nightly ritual is less a chat with God than a monologue of self-disciplining fear ("if I should die before I wake/I pray the Lord my soul to take").  Moreover, reasons Johnny, if God is omniscient, He certainly doesn't need to hear a little boy reading the same lines over and over again every night.  "Ho-Hum--there it is Lord--read it."  Exposing his ass to God on high provides the humorously cutesy/blasphemous "kicker."


As it just so happens, through somewhat random chance, I was reading Wilhelm Reich's The Mass Psychology of Fascism only a few days after buying this postcard (for another project).  For those who might be interested in such things, the following excerpt from Reich provides an even more radical commentary on the scenario above.  Enjoy!
THE ANCHORING OF RELIGION THROUGH SEXUAL ANXIETY
From Wilhelm Reich's The Mass Psychology of Fascism, 1933
Antisexual religiosity is a product of patriarchal authoritarian society. The son-father relationship found in every patriarchal religion is no more than a socially determined content of the religious experience; the experience itself results from patriarchal sexual suppression. The function which religion gradually assumes, that of maintaining renunciation and submission to authority, is secondary. It can build on a solid basis: the structure of the patriarchal individual as it is molded by sexual suppression. The source of religiosity and the core of any religious dogma formation is the negation of sexual pleasure. This is particularly clearly expressed in Christianity and in Buddhism.
a. Anchoring of mysticism in childhood.
Dear God, I lay me down to sleep,
Send an angel watch to keep.
And, Father, let your loving eye
Look down upon me from the sky.
If wrong I've done within the day

Overlook it, God, I pray
Father, guide me patiently
And may my faults forgiven be.
And all persons great and small
Feel your protection overall.
This is one of the many typical prayers which children must recite before going to sleep. One is prone not to pay any attention to the content of such a prayer. Yet, it contains in concentrated form all that is the essence of mystical content and feeling: In the first couplet the petition for protection; in the second, a repetition of this petition, made directly to the "father"; in the third, the petition for forgiveness for a committed wrong: God should not look at it. What does this guilt feeling refer to? What is God petitioned "not to look at"? If one knows the world of the average child, the answer is not difficult: In the center of the forbidden things is the wrongdoing of playing with the genitals.