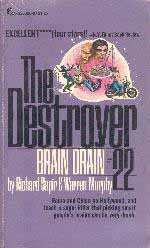 We open strong with a particularly bloody slaughter in...yes, once again, Greenwich Village, which apparently even in the mid-1970s could serve as the right-wing writer's go-to den of queer liberal iniquity.   Seasoned detective eats a sandwich as he inventories various severed body parts and a few torsos stuck into the wall for dramatic effect.  The coroner slips on some blood and lands on his ass, which is presented here as hilarious.  But it's all a red herring, really, as our featured psychopath murders the detective the next day when he returns to the crime scene, taking us to....

A guy named "Remo" and his elderly Chinese-Korean kung-fu master, who apparently together constitute "The Destroyer."  Not much back story here, but apparently the old master taught Remo the deadliest form of kung-fu on the planet, one known only to a small village on the Chinese-Korean border and practiced exclusively by extremely loyal assassins for hire.  Remo works for a group called CURE, which stands for something clever and funny but as the book is in the other room and it's late, we'll just let that one pass.  Soon our heroes are on the trail of the killer who, in addition to dismembering various poets, painters, and musicians in a Greenwich Village basement, also extracted their brains--giving us the subtitle, "Brain Drain."

A real disappointment inasmuch as the book promises to be the story of an insane killer sucking out the brains of Hollywood stars, literally.  There is more brain removal, to be sure, as the story moves west, but our "killer" turns out to be an android who, in lazy android fashion, is merely searching for the key to human creativity by closely examining the structure of imaginative human brains (which allows the authors to take a few predictable swipes at the general level of creativity in Hollywood).

Why does the android need to be "creative?"  Because he knows it's his only hope in defeating his one mortal threat on the planet, namely Remo and the older Kung Fu master.  Duped by the allure of trepanned starlets, I was willing to jump in here at #22 in the series, so I have no clue as to where this android came from or if this conflict had been going on for awhile.  Nor will I ever know as, in the end, the book became simply unreadable.

Here are a few bonus features for your consideration:

--completely gratuitous fight with obnoxious bikers in a Nebraska roadhouse, presumably because no real "action" had transpired for about 20 pages.  In this confrontation, our man Remo rips a biker's nose off and drops it into his beer, all with one super-quick kung-fu move.

--after Remo rips off the biker's nose,  a woman living in a "high rise in Chicago" calls into a radio show to argue for the abolition of all prisons as they treat criminals inhumanely, offered, seemingly, for no other reason than to solidify the hypothetical reader's contempt for out-of-touch liberals who would let biker scum, like the one just de-nosed, simply go free in the world.

--the old Kung Fu master, who possesses much wisdom, is also addicted to daytime soap operas that all have funny titles.

--from the cover, a girl on a motorcycle apparently appears at some point, but I had given up by then.