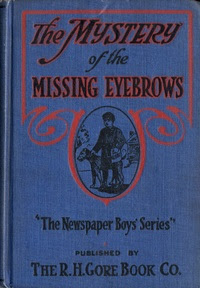 People have looked to each new generation with disappointment for many decades now.  Americans always claim they want a better life for their children, but in truth I think most people look forward to lording their superior intelligence, ethics, and tenacity over their hapless progeny.  This is especially true in the wake of the "Greatest Generation."  By the time he was 17, your grandfather knew how to replace the engine on a B-23 bomber.  Now you're a hero for knowing all the best places to hide in Call of Duty.
One reason previous generations were so much hardier is the absolutely punishing fiction they were forced to read as children.  More people have heard of "Horatio Alger" than have read his books, obviously, and that's probably for the best.  Alger and his many imitators churned out volume upon volume of stories about boys absolutely thrilled to be putting in 16-hour days sorting rocks and cockleburs out of Poison Ivy patches.  Just reading about their exploits makes you feel tired and scratchy. 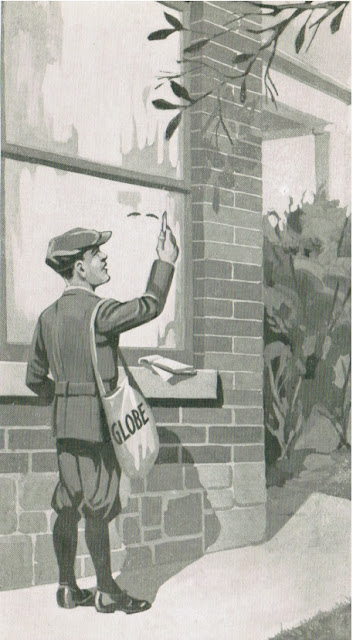 Renfro solves the mystery, of course, but this becomes secondary to the book's primary function: instructing young boys in the art of effective newspaper distribution.   So, even as Renfro pokes around for more clues and evidence, he must continue to build his subscriber base and chase down slackers who refuse to pay for their papers.  A typical day for Renfro involves getting up before dawn to go to the printers and retrieve his stack of papers, making his deliveries along the 2-hour trek that is "Old Grief," keeping a look-out for eyebrowless thugs, going to school, picking up the afternoon edition, spending another 2 hours on "Old Grief," stopping by the homes of new prospects and convincing them to take the paper, looking for more clues, going home to supper, doing homework, and then going to bed. Not only does Renfro survive this grueling ordeal, he does so with an almost sickening enthusiasm.  Even in the deepest snows of an Indiana winter, he can't wait to pop out of bed at 5 in the morning and start his route, all on the off-chance that he might glimpse a relevant clue for his case.  In fact, Renfro is so unbelievably driven that he decides to not only solve the case of the "missing eyebrows," but to also win the newspaper's big "turkey contest" by getting the most new subscribers.   Which of course he does, handily, thereby earning the respect of his boss and fellow paperboys.
After Renfro solves his case, we are left to anticipate the next installment. Sadly, however, it seems there was never another book in "The Newspaper Boy" series.  Perhaps author Rudd/Gore had imparted all the wisdom he possessed about managing a successful paper route and therefore couldn't justify additional entries.  Or maybe this book was such a bomb that finances precluded any more titles (Renfro's zeal for throwing newspapers, after all, had to compete with more timely series like "The Motion Picture Chums" and "The Radio Boys").  What is odd about the demise of the series, however, is that the publisher promised Missing Eyebrows was to be the first in a series of 12 stories, all of which already had very specific titles.  In the closing fly pages of the book, plot summaries appear for the next 6 editions--each slightly less detailed than the one before it, suggesting author Rudd had some larger vision for Renfro's character arc--even if he had only worked out the plot details for the next two or three books.
A blog entry on juvenile fiction of this era supplies some interesting information in this regard.  Apparently there are a great many such "phantom titles" (books planned and announced in a series but never actually published) in kid fiction from this era, non-existent books that nevertheless become the Holy Grail of collectors who haven't yet figured out certain titles never actually made it to print.
If nothing else, The Mystery of the Missing Eyebrows has taught me an important lesson:  the newspaper is without a doubt the most inefficient and ridiculous medium of communication ever devised.  I know there are many nostalgic for the feel of newsprint in the morning, but really, after reading about these poor kids forced to walk ass-deep through snow at 6 in the morning while in dangerous proximity to demented, well-armed sea captains living in the woods,  I'm ready to go completely digital on the news front.
Email Post
Labels: 1920s boy energy kids mystery