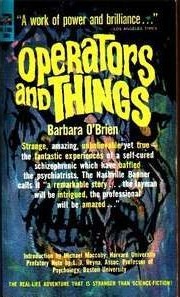 Barbara O'Brien
Ace Paperbacks (1964)
Relatively well-known entry in the necessarily limited subgenre of writings by recovered schizophrenics.  Author O'Brien (a pseudonym) wakes up one morning to find three shadowy figures at the end of her bed who she comes to call "operators."  In her delusional system, the world is divided between "operators" (those capable of reading and transmitting thought) and "things" (oblivious people who are manipulated by the operators).  Not unlike the famous Daniel Paul Schreber, O'Brien comes to believe that her communications with unseen forces have created a "breach" of some kind.  This leads to an extensively elaborated delusion in which she is at the center of property litigation among the operators (who own and trade "things" for sport).  Miraculously, she avoids institutionalization (except for a couple of nights) and ends up having the wherewithal to make an appointment with a psychiatrist.  Shortly thereafter, her "voices" simply vanish.

In the second half of the book, O'Brien speculates on just what triggered her psychotic break.  Her first analyst, a Freudian, is mocked for suggesting her problem was completely sexual (he apparently told her at one point that a woman her age should have had over 127 lovers--O'Brien does the math and realizes maybe her therapist is crazy).

Interestingly, the cover on the Ace paperback edition of 1964 utilizes the same artist who did the publisher's "occult/paranormal" titles--which speaks volumes as to how the public regarded schizophrenia at mid-century.
Email Post
Labels: going bonkers mind control psychiatry psychoanalysis Psychosis