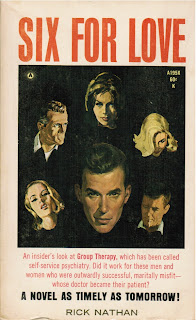 Rick Nathan
Award Books
Odd little book about 5 strangers brought together for "group therapy" (these 5 + the therapist = the "six for love").  As the story opens, therapist Mark Forster is having a fling with one of his psychology students, Alicia, who asks if she can "sit in" on Mark's next group as a training experience.  He reluctantly agrees.  We also learn that Mark has never gotten over his divorce five years earlier and that he suffers from splitting headaches.  We then go to individual chapters focusing on the core dysfunctions of the other four members coming to the group.  There's Kent, a loutish used car salesman who lives to humiliate and abuse women.  Irene is married to a college student who treats her like his mother.  Marisa is a secretary who has a chance at a relationship with her well-off boss, but can't get over the guilt of having slept with her sister's husband.  Brian is a 40 year old nebbish who still lives with his sister and brother-in-law.  He occasionally enjoys the company of prostitutes.

Alicia enters the group as a student but quickly becomes a patient, bringing an end to her relationship with Mark the therapist.

Kent hurls abuse at all the women in the group, which ends up attracting Irene as her student husband is a milquetoast more interested in his studies than in her body.

Marissa begins to sabotage her new romantic relationship with her boss, but he's such a great guy that he gets her to confess her secret shame and it doesn't bother him.

Brian confesses his troubles with women to Alicia, who takes pity on him as a "friend."  But eventually she sees the "real man" in Brian and they become a couple.

In the end, no one seems to need Mark the therapist anymore--particularly Alicia now that she is with the suddenly confident Brian.   In the final chapter, Mark's haunting memories and intense headaches finally result in a complete mental breakdown.  As the book comes to a close, the variously "cured" patients wait for the ambulance that will whisk Mark away to the psychiatric ward.   The irony!
Email Post
Labels: 1960s psychiatry Sleaze