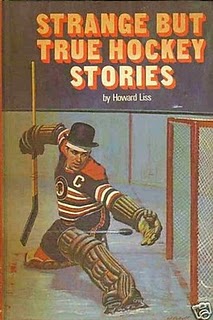 Any sport featuring men with sticks chasing after a small black disc on ice would seem to have an unfair advantage for generating "strange but true" stories, especially a sport that most people don't really care about (thus allowing the "truthfulness" of any given tale to remain generally outside of popular memory).  That said, let's see what author Liss has uncovered:

Three young men with German names become very popular as players for the Boston Bruins.  Nicknamed "The Kraut Line."  Once WWII begins, Boston fans beginning booing "The Kraut Line," even though all 3 were born and raised in Canada.  Probably more appropriate in a book called "Strange But True Stories of American Stupidity."

Foster Hewitt becomes the most famous and beloved of all Hockey announcers in Canada (true, perhaps, but not in the least bit strange)

Gordie Howe scores 786 goals during his career.  Spun as "strange" in that Howe at one point scored goal 714, obviously, thereby breaking "Babe Ruth's" home-run record in baseball.  But that isn't really strange inasmuch as it simply involves math in two unrelated sports.  I'm beginning to have suspicions, actually, that nothing very strange actually does occur in hockey.

The Toronto Maple Leaf teams of the 1930s are judged the "zaniest team" in hockey history, seemingly because a clotheshorse on the team once jumped into a pool wearing a suit.

Goalie goes 309 minutes of game time without allowing a goal.

Conn Smythe, founder of the "Maple Leafs," enjoyed extraordinary luck at gambling, which helped him get the necessary funds to buy the Toronto team.

Player discovers that cracked/curved stick allows for more unpredictable shots on goal, initiating a craze for the "banana blade."  The league eventually bans them.

One player almost kills another in a hockey fight, but the two shake hands on the ice a few months later.

Hockey has featured a large number of "brothers" on the ice, playing either on the same team or as opponents.

A player for an eliminated Russian team, at the height of the Cold War, visits the American locker during half-time in an Olympic Gold Medal game and teaches the U.S. players how to use oxygen at high-altitudes for better performance.  America, newly infused with oxygen, goes on to win the Gold.