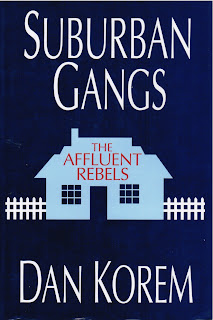 Dan Korem
International Focus Press
The author is taking his trash out one morning in an "affluent" suburb of Dallas when suddenly he sees two surly teenagers flashing him "gang signs"...and they're white!  Thus begins a multi-nation quest to understand why generally well-off middle-class teenagers (they're white!) would turn to gang life.

Where do I begin?  Perhaps by explaining what Korem considers a gang.  While you might think from the opening anecdote that this will be a book on "whiggers," those adorable goofballs who wish they could be straight out of Compton rather than still living in Grapevine, the book in fact is rather catholic in its designation of a "gang."  White kids throwing gang signs in the ally are worthy of alarm, but so too are:

It's a wide net, one that pretty much discredits Korem's "findings" from the start inasmuch as any subcultural marker that would disqualify a kid from football or cheerleading at Plano High School means S/HE IS IN A GANG.  This is true even for kids in something as seemingly innocuous as a "new wave" gang, which according to Korem's informants consists of hanging out at the mall, acting more "arty" than everyone else, and listening to poetic songs about suicide (here I will say that the B-52s deceptively upbeat "new wave" dance anthem "Rock Lobster" once made me contemplate suicide, but only after hearing it 500 times).

To make matters worse, Korem expands his study to England, Switzerland, and Hungary (although I'm not exactly sure why this particular constellation became the data pool).  Rather predictably, we are told that those who join gangs share a universal psychological profile, thus turning complex sociological, cultural, and historical phenomena into a problem that might best be confronted by selling parents a book or seminar that will tell them how to keep little Joey out of the Satanic Latin Kings for Arsenal club forming down the street. 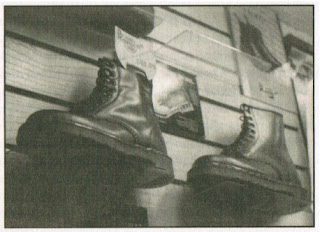 I will confess that I found this book particularly amusing in that I lived in Dallas during some of the period that inspired Korem to see good kids going bad all around him.  I don't know what it is about Plano, but somehow it seems to be at the epicenter of every new "moral panic" over youthful deviance.  For awhile every kid in Plano was a heroin addict.  Then Plano became the teen suicide capital of the nation.  I'm sure if we dug deeper, we'd find Plano was the origin point for kids choking to death on "Pop Rocks."  I would not be the least bit surprised, meanwhile, if even now someone is polishing off a manuscript about Plano as the teen-autoerotic asphyxiation capital of the nation.   Perhaps Korem is the motive force behind all of these panics--understandable, certainly, if you begin each research project assuming whomever you happen to encounter in your ally one morning is symptomatic of something global.

Given my familiarly with the area and era in question, I did find one section extremely painful.  Korem mentions a certain "countercultural" record store operating in the suburb of Richardson during the 1980s that became a hub for recruiting kids into "occultist" gangs.  For the life of me, I have no idea what store he's talking about, and as someone who at that time would regularly drive 10 to 20 miles to buy a new Throbbing Gristle record, I find it hard to believe this store could have escaped my notice.  The only conclusion I can draw is either this store didn't actually exist, or if it did, the owners did not consider me worth recruiting into Satan's army.  If the latter, I can't help but feel a little hurt even 30 years later, since I have no doubt that my 17-year old self would have enthusiastically embraced any doctrine that promised to give me occult power over the jocks and goat-roping dipshits in my high school.  Why was I not deemed worthy?  I certainly had the wardrobe and attitude.

Jesus never makes an appearance in Suburban Gangs--but it most definitely has an evangelical vibe to it, especially as it reduces all questions of taste and identity back to personal dysfunctions that can only be cured by reinvigorating the "family."   In the end, the book is kind of like reading Dick Hebdige's Subculture: The Meaning of Style in reverse in that style, for Korem, has no meaning (beyond "gang" affiliation).

After doing a little wiki-background on Korem, I have discovered that he wrote another book after this one: The Art of Profiling: Reading People Right the First Time (1997).  Here Korem claims he can teach you to "read" a total stranger's core identity in mere seconds by asking yourself 4 key questions about the individual.  This system, moreover, will supposedly work even if the person is from another culture and does not speak the same language (or indeed, does not speak at all)!  Korem's gig now apparently is to teach this skill to ferret out business prospects, potential gangbangers, and post-Columbine "random acts of terror" kids.  Judging by his success in sorting out the not terribly complex field of youth subcultures in Dallas in the 1980s, I remain suspicious.
Email Post
Labels: 1980s j.d. musical evil religion Satan teens true crime