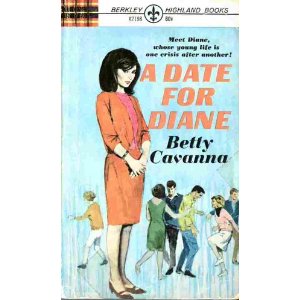 Diane is 15 and perplexed at the rituals of dating that lie ahead of her.  But then the boy next door, Jim, asks her to the movies, opening a sophomore year of unparalleled social anxiety, sexual apprehension, and physical awkwardness.  Though there are a number of "high points" during the year, Diane's time is for the most part consumed by an unending string of crises that threaten to humiliate and/or disenfranchise her from the high school's social hierarchy.  Among the tribulations she must endure:

--parental interference in date.
--getting braces the day of a big dance.
--arrival of an attractive blond from New York City.
--same blond taking her position on the hockey team
--same blond on occasional dates with "Jim"
--boys watching her at hockey practice
--tutoring of lummox "Jim" for English exams
--forced to go on date with dweebish Freshman
--unexpected arrival of dorky cousin from Michigan
--forced to take dorky cousin to big Halloween dance
--dorky cousin turns out to be "boy magnet,"
thereby taking even more attention away
from Diane.

Throughout the book, Diane angles for a date with the brother of her friend--an 18-year-old in his first year at the Naval Academy in Annapolis.  That date finally happens at the big spring dance.  Toward midnight, Navy man asks her to take a walk on the golf course.  But just as Diane is about to experience her first and most-hyped kiss, she decides she's not ready yet for such shenanigans and runs back to the party to find her "true love" Jim.  Maybe next year.

Though the cover of this edition (Berkeley--1963) suggests a young Jackie Kennedy fruggin' on American Bandstand, do not be deceived--this book is centered squarely in the teen psycho-social imaginary of 1946.  It's all about malt shops and miscommunication.
Email Post
Labels: 1940s romance teens what girls think about