James Collier
MacFadden Books
"If we really enforced our laws about sex--99 out of 100 of us would be in jail!"  So begins Collier's essay on America's hypocrisy about matters sexual as of 1964.  Promises to explain why Americans in particular maintain a belief in "sanctioned" vs "forbidden" sexual practices, but mainly just provides background information on how normal various sexual "sins" are among the populace.  Can you match the sin to the chapter title?  Go ahead, give it a try: 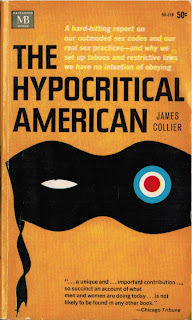 The last chapter, oddly enough, is called "Victorianism: Hail and Farewell," in which Collier takes a stab at historicizing sexual hypocrisy and lays the the blame at class antagonisms in both Europe and the U.S. following the French Revolution.  Michel Foucault's interpretation of these materials would have to wait another decade or so.

My copy, purchased at a thrift store in Skokie, Illinois, features two instances of underlining from a previous reader.  I reproduce these because marginalia often provide a fascinating insight into the minds that have trodden book pages in the past.  As is often the case with meticulous underlining, these two examples come in the first chapter when the reader was particularly enthusiastic about understanding the "hypocritical American."  His or her zeal seems to have waned as the book went on.

I'm thinking this reader was someone searching for evidence to attack "Christian marriage" as a historical invention rather than a timeless "truth."  Here's hoping s/he was a complete nuisance in the suburban Chicago married cocktail scene of the mid-1960s.  Perhaps s/he only got through the first chapter because this epiphany initiated a life of unhypocritical debauchery!
Email Post
Labels: 1960s sexology Sleaze