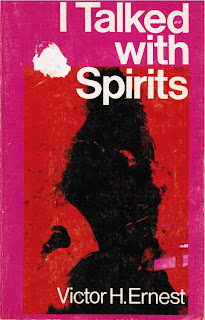 Victor H. Ernest
Tyndale House Publishers
Seems unlikely, but let's see what Ernest has to say about the matter.

When the author was a small child in rural Minnesota back in the 1930s, he remembers a neighboring family of "Spiritualists" visiting one night with news that they had contacted the author's little sister, who had died only a few months earlier.  Thus began a series of nightly seances in the home that led the family deeper and deeper into Spiritualist doctrine.  Ernest, already well read in the Bible, took the opportunity during one seance to ask the Spirit visitor three questions about Christ.  The spirit agreed that Christ was the Son of God, but when queried as to whether or not Christ died for man's sins and represented the only means of salvation, the "spirit" became angry and left the room.  From here Ernest makes the only possible conclusion:  the spirits visiting his family during the seances were "real" but demonic in origin.  Thus began a life's passion for exposing the Satanic origins of most "spirit" phenomenon." 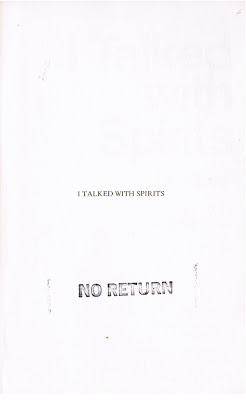 After this glimpse into thirties America and a rather poetic treatment of the old "levitating trumpet" trick beloved by theatrical mediums, the book devolves into the standard string of Bible quotations warning against necromancy, the occult, mediumship, etc.  Published in 1970, it's somewhat strange to see someone still doing battle with a religion that peaked with Mary Todd Lincoln a hundred years earlier--but Ernest makes his warnings relevant by folding in Jeanne Dixon and other "seers" as the legacy of this evil practice.

Now, for a final chill, check out the wonderfully ironic fly page encountered in the copy I found at a thrift store in Rockford, Illinois
Email Post
Labels: ghosties mediumship Paranormal religion Satan