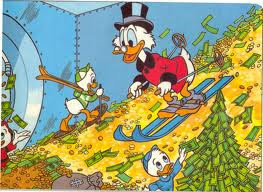 In How to Read Donald Duck (1971), Ariel Dorfman and Armand Mattelart examined how Disney comic books export imperialist ideology to the children of Latin America.  As befitting a Marxist analysis of a lowly comic title aimed at kids, much of their discussion focuses on curious displacements and troubling absences (like the fact that there are very few direct relatives in the Disney-verse, only endless cousins, nephews, uncles, etc.)  One feature of Duckland, however, is less than subtle in promoting First World dominion over the developing nations:  Scrooge McDuck, already the richest of all ducks, remains relentless in his pursuit to own everything of value in the entire world (apparently so that he might covert all his wealth to cash to stock his decadent ski-vault).  Often, McDuck's greed is the impulse that kicks off an adventure for Donald, Huey, Dewy, and Louie, sending them to some remote and more "primitive" part of the globe in search of diamonds, gold, oil, and other valuable commodities.  As Dorfman and Mattelart point out, these stories often take the form of McDuck simply swindling the local population, buying up rare and precious resources from the "natives" who have no idea how much these items are actually worthy.

More reasons to remain suspicious of Disney, a corporation that only this week coerced Hollywood to award Tinkerbell a star on the Walk of Fame, this despite the fact that Tinkerbell does not even exist, having been designed as pixie cheesecake to keep bored fathers awake in the 1953 version of Peter Pan.
Remaining vigilant against the Disney empire is always good advice, especially now that they have seemingly perfected the dark art of breeding tweener pop stars to shuffle between TV, movies, and Radio Disney--a convergence jackpot that old-fashioned payola could never match even in its heyday of cramming pasty white singers into teenage consciousness.

But there is a danger in remaining so exclusively fixated on Disney.  For example, no one has been paying sufficient attention to the equally questionable politics of Hanna-Barbera. 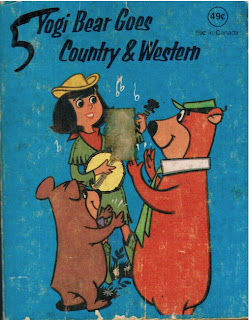 Case in point: A tiny book for kids titled Yogi Bear Goes Country & Western (1977), which I recently purchased for a dime at the local thrift emporium.  I will admit to being somewhat intrigued as to how the author(s) would handle melding a vision of country music as seen from Ventura boulevard with Yogi's traditional commitment to picnic terrorism.  At the very least, I thought there might be comical illustrations of Boo Boo learning to play the Dobro.

What I got instead is one of the most stridently unapologetic defenses of segregationist social policy ever to appear in print.

Like most stories set in Jellystone, this one begins with Yogi and Boo Boo waking up after the long winter hibernation (imagine how crushing this must be for Boo Boo, who emerges from slumber year after year only to discover he is still and will forever be merely a cub).  As he is wont to do, Ranger Smith then arrives to set the story in motion, telling the bears that a famous country music singer, Anna Briggs, is camping just down the trail.  "HOOTENANNY ANNIE?" interjects Boo Boo, who is apparently a big fan.  He and Yogi want to run over and say hello, but Ranger Smith observes, "I think you two forget that you're bears!  Some people might get a little upset, if two strange bears came dashing after them."  Ranger Smith then volunteers to accompany them to Annie's trailer, that is if the two bears will agree to remain "cool and calm" during the visit.

The meeting goes well.  Honey is exchanged, and the conversation turns toward Annie's concert plans for the spring season.  Boo Boo has an epiphany.  Why not have a big televised concert from Jellystone Park?  Everyone agrees this is a swell idea.  Annie's manager even promises promises that Yogi and Boo Boo will get to sit in the front row.

Preparations begin immediately.  To clear the concert space, Ranger Smith asks Yogi to activate "UOJPBTCUTPAKIC," an acronym for Union of Jellystone Park Bears to Clean Up the Park and Keep it Clean.  The unionized bears of Jellystone work for days transforming the park into a picture-perfect concert venue for the live television simulcast.  Yes, things are looking pretty good for Yogi and his young ward, and they look forward to watching Annie from their choice seats in the front row.
Braggart that he is, Yogi has promised all the bears in Jellystone they can come to the show as well, but when Ranger Smith's supervisor arrives for a park inspection, he's not too sure that integrating humans and bears at the concert will work out.  Yogi pleads that his fellow bears will stay at the fringes of the audience, in the dark and "out of sight," but Commissioner Phudd is not convinced.  "What happens at intermission?" he asks, "the audience steps out for a breath of fresh air and sees themselves surrounded by 300 bears."

Yogi gets up in Phudd's grill and rails against this injustice, but to no avail.  And it gets worse.  Even though the concert was Yogi and Boo Boo's idea, the Commissioner tells them that the sight of even just two bears strolling into the show and sitting in the front row would cause a panic.  Yogi gets as furious as an anthropomorphic bear can get in a comic book, saying, "Come on Boo Boo.  Seems as though we're fine for getting the concert here in the first place and breaking our backs to clean up the park and set up the chairs, but we frighten people."

As he leaves, Yogi confronts the Ranger with a veiled threat of civil disobedience.  "How do I explain to 319 bears that after all they've done, they can't even go near the place?  Some of them have a lot worse tempers than I have, and I wouldn't blame them one little bit if they went on a rampage tomorrow and tore up the park, including the auditorium.  Good night!"

At this point author Horace J. Elias had an important decision to make.  The stage is set: disaffected bear working class, marked as a terrifying Other by their human masters, facing a crisis of open exploitation and blatant discrimination.  How will they respond?  What lesson will Hanna-Barbera teach the youth of 1977 about social injustice?

The next morning, on the day of the big concert, the bears adopt a measured plan of civil disobedience, blocking all the entrances to Jellystone Park.  But they will no longer listen to Yogi, dismissing him as some kind of "House Bear," mad that he talked them out of simply ripping up the park with riotous fury.  To make matters worse, a big storm is blowing in from the north threatening to litter the park with more debris.

Enter Hootenanny Annie, who asks to speak to Yogi in private.  When they return to the Ranger's cabin a few minutes later, Yogi appears to have had a major attitude adjustment.  He leaves and quickly returns with his 300 bear work force, ready to activate UOJPBTCUTPAKIC once again when the storm hits the park.  The humans are mystified.  What did Annie say to Yogi that suddenly turned the furiously aggrieved bears into such docile subjects?
The big storm hits, and the bears fight valiantly--clearing rock slides, restringing television cables, keeping the roof from blowing off the amphitheater.  The show goes on as planned and is a huge success.  Afterwards, Ranger Smith muses, "It's just too bad that after what Yogi and Boo Boo and the rest of the bears did, they didn't even get to hear Annie sing one song."  Yes, everyone agrees, that's a shame.

After the rangers and other humans are gone, Annie tells her manager to pack up the camper and have the band follow her.  An hour later, she performs a second concert exclusively for the bears.  This is the deal she struck with Yogi, making him the Homer Plessy to Jellystone's John Howard Ferguson.

And there you have it:  Hanna Barbera's solution to issues of difference and discrimination--SEPARATE BUT EQUAL.  Yogi and his kind are welcome to attend hootenanny jamborees, just so long as they do so in their "own" venue and apart from any frightened humans.  In fact, the story ends up suggesting everyone involved prefers it this way.

Here's hoping there was a sequel in which Yogi takes up country singing and becomes the Charley Pride of the National Park Service.
Email Post
Labels: Animal Kingdom Comics Conventional Politics Normalization