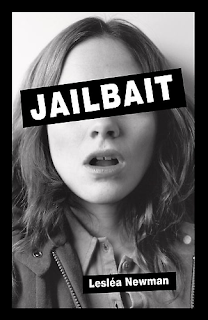 Leslea Newman
Delacorte Books
Another book bought for the cover that turns out to be something else entirely.  What looks like a Fassbinder-like crime pulp is actually a story for teenage girls about self-esteem and sexual abuse.  15-year-old protagonist Andi Kaplan hates herself and high school in 1971 Long Island.  Soon an older guy in a car is honking at her each day as she walks to school.  Frank, who is 30, eventually gets her to accept a ride, and soon the two are involved in an increasingly intimate relationship.  They have awkward and (for Andi) disappointing sex on her 16th birthday, leading to a fight, a reconciliation, and then plans to run-away together to another town.  But Frank takes a powder and is never seen again.  Author Newman has made a name for herself by writing books meant to challenge school-boards and make red-state librarians nervous, her most famous title being Heather Has Two Mommies (1989)--a particularly flammable piece of kindling in the early 1990s culture wars.  Jailbait is, somewhat surprisingly, rather matter-of-fact and even banal in its account of statutory rape, an attempt on Newman's part, I suppose, to make the topic less incindiary. Frank doesn't get caught and Andi doesn't get pregnant and/or destroyed by the experience.  The book is so blasé about its topic, in fact, that it is difficult to know what teenagers who hate themselves and high school are supposed to take away in the end.
Email Post
Labels: 00s creepy and/or uncanny teens what girls think about