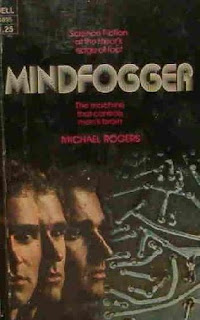 Michael Rogers
Dell Books
Niles Spindrift has been a genius at electronics since he was a child.  Now a hippie in the early 1970s, he is constantly on the run from a former employer that feels he is on the verge a major technological breakthrough.  And he is...the Mindfogger!  When activated, the "mindfogger" basically gets everyone around it pleasantly stoned, a power Spindrift tests by shutting down the production line at a battery factory for two weeks (it's an anti-war statement: the batteries go to the military which go to Vietnam).  Like a surprising amount of sci-fi from this era, there seems to be little actual "science" in the story other than the vague notion that electronics might be used to control the brain.  Mostly, Mindfogger is about Spindrift and his old lady trying to live a small desert town while he works on his device, culminating in 30 or so pages that read like Gun Crazy.
Email Post
Labels: 1970s golden state of mind hippies mind control radicals sci-fi