Famous Animals of the Studio Era 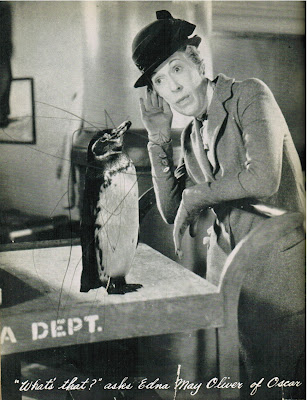 Follow That Penguin! Largely forgotten today, "Oscar" the Penguin made headlines in 1931 after an unsuccessful attempt to avoid appearing opposite Miss Edna May Oliver in  The Penguin Pool Murder (1932).   A few days before shooting was to begin, the despondent Oscar escaped his handler's pen and fled 100 miles down the coast to La Jolla.   There he was found "perched disconsolately on some rocks off the shore.  A man swam out to him and Oscar presented every evidence of delight at renewing acquaintance with a human being.  One of his owners hastened to La Jolla and brought the wanderer back in time to fulfill his contract with the RKO studios" (146).  Outraged at the public snubbing, Oliver allegedly took every opportunity to feed Oscar dirty coins and small rocks between takes. 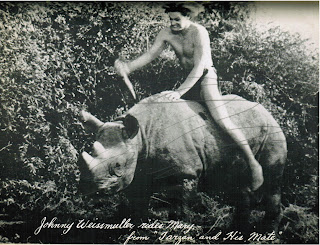 From Star to Stew Meat  Cruelly mocked as the "biggest" actress at MGM, "Mary" the Rhino is seen here in her only appearance on the silver screen.  Having made a mad dash at the higher-billed "Cheetah" in Tarzan and his Mate (1934), Mary suffers a brutal stabbing at the hands of Johnny Weissmuller.  Sadly, she never recovered from her wounds, dying only a week after this scene was shot.  Not all was lost, however, as studio head Louis B. Mayer authorized making Mary the "Blue Plate" special in the MGM commissary for November 18th, 1933.  Clark Gable famously observed that Mary "made a damn fine stew." 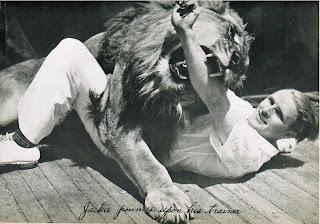 The "Mane" Attraction! Often confused with Leo the MGM lion, "Jackie" first appeared on screen when only a tiny cub.  "In this picture," recalls his trainer, "a man comes home late at night, opens the front door and stumbles over a cat.  Then he comes to Jackie, --a little larger animal, and in the next room he enters he finds an animal a bit bigger than Jackie.  The animals he encounters as he walks from one room into another keep growing bigger and bigger until he comes to the largest of them all, Duke, a big old lion we used to have here at the Zoo" (60).  Despite his appearance in this landmark conceptual gag (said to be a favorite of Jean Cocteau), Jackie is now best known for half-heartedly wrestling a series of doughy white men in a string of extremely racist jungle pictures. 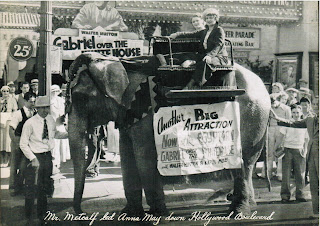 Red Light Anna  Did you know an elephant is responsible for the stop light at Hollywood and Cherokee?  It's true!  When Anna May the elephant appeared for the premiere of her picture, Gabriel Over the White House (1933), a jolting car horn sent her stampeding down the sidewalk in front of the Egyptian theater.  As the panicked pachyderm made her way into the intersection at Cherokee, she was "T-boned" by director Rouben Mamoulian in his 1927 Studtz Bearcat.  Neither man nor elephant was seriously injured, but the collision was the last straw for city elders long concerned about this dangerous crossing.  After healing from some superficial flesh wounds, Anna May was invited back for the stop light's official dedication a month later. 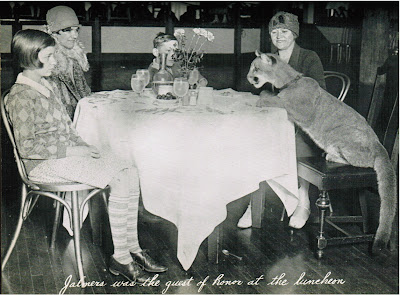 Tragic Cougars "Jalmers" the Cougar comprised one half of a famous pair of Cougar twins in old Hollywood, the big cats starring either alone or together in over 400 motion pictures.  Jalmers career came to a tragic end, however, immediately after this publicity photo was taken in 1936. Apparently agitated by the whiny complaints of his child co-star ("Little Martha Marie," seen here to the left), Jalmers suddenly went berserk on set and bit off the index finger of the shoot's make-up artist.  Escaping briefly onto Gower street, Jalmers was beaten to death with a tire iron by an extra who just happened to be driving home from the set of Follow the Fleet (1936).  His twin, "Jockamo," apparently never recovered from the loss of his beloved brother and died two months later in his pen on the Paramount lot.  Fearing more scandals for the studio, incoming chief Barney Balaban blocked an official inquest into the matter, allegedly bribing the L.A. County Animal Coroner to list the cause of death as "natural causes."
All citations from Wild Animal Actors (New York: Whitman and Co., 1937).
Email Post
Labels: Animal Kingdom Archeology Filmed Product