Philip Atlee
Fawcett Gold Medal
Joe Gall is one of the lesser known detective/action heroes of the 1960s.  This one caught my eye because of the incredible teaser line at the top: "Joe Gall masquerades as a soul brother in a secret army of assassins."  From the back cover: "All he needed was a few injections, an Afro wig, phony identification, a prison record--and presto!--Joe Gall, white secret agent became John Earle, black secret solider." 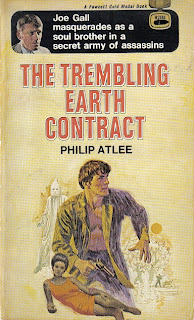 Gall wasn't the first white guy to go undercover as a black dude, and he certainly wasn't the last either.  What makes The Trembling Earth Contract particularly insulting is just how easy Gall/Atlee presume it would be to perform "blackness."  Easy and racist.  When he is called upon to infiltrate a radical African-American paramilitary group--led by college-educated blacks and staffed by recruits from prison--Gall realizes he'll need real street cred to get an invitation to join.  His plan (after the injections and Afro, of course)?  Get really, really drunk in the black section of Little Rock, Arkansas and then take a swing at a white cop.  It works!  Before you know it, Gall is in the toughest prison in Arkansas passing without suspicion as an embittered black veteran of 'Nam, ready to return fire on whitey.

Looking to compete with James Bond, Matt Helms and other dynamic male agents of the era, Gall is also quite the cocksman.  In one of the most over-the-top seduction sequences I've ever read, Gall (still white) hosts an attractive lady lawyer at his elegant man-cave somewhere in the hills of the Ozarks. The evening includes steaks and fine wine, a naked dip into Gall's steam room (behind a waterfall that feeds a pond of cold water for the Scandinavian after-steam plunge), and some time on the back porch watching Gall's family of imported white tigers emerge from the woods to eat horse meat!

Of course, going to all the trouble of having "black person" injections and wearing an Afro wig wouldn't be worth it if you didn't also get to score some "brown sugar," and Gall most assuredly does that as well.

Despite the unexamined racism of the "undercover" device, author Atlee does express some sympathy for the historical plight of African-Americans in the U.S.  Even though Gall intentionally fires errantly when his team of black assassins executes a former KKK agent whom the state of Mississippi would not convict of an obvious murder, he certainly understands the impulse for justice that guides the group.  Later his black squeeze tells him that her little brother was shot dead by cops for protesting on a college campus up north, and Gall agrees that's a bum deal.  And then at the very end, reunited with his white skin and tiger-watching lover, Gall goes on a long political rant about how the right-wing will soon take over the country and, in its fear of black militancy, institute a form of apartheid worse than South Africa. The radical black male, he predicts, will go the way of the American Indian.

It seems the "Joe Gall" books constitute a true serial. At the very end, four black soldiers from the paramilitary compound storm Gall's oasis to get revenge for his infiltration and betrayal of the group.  As we leave Gall and his girlfriend, they are hiding behind the aforementioned waterfall, armed and ready for a show-down.  As there are many more books in the series, I assume they survive.
Email Post
Labels: 1960s kickers of ass pulp radicals