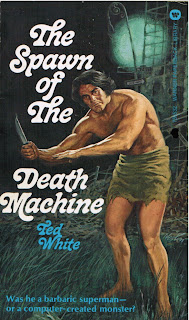 Man wakes up naked in an all-metal room.  A voice tells him it is time to go out into the world and gather "data."  And so he does.  The first people he encounters live as neolithic hunter-gathers.  He kills their leader and gets a "spouse" named Rifka in the process.  More wandering.  Rifka ditches him for another guy because he won't sleep with her.  More advanced communities discovered.  Lured by prostitute to stay in a small town that needs more residents.  Finds Rifka in jail after she ditched the other guy.  They escape and he at long last impregnates her.  One night he realizes he has the power to breath fire.  They arrive at a huge dome covering the remnants of New York City, which now houses 500 African-American men and 500 African-American women.  It is the only remaining outpost of the technologies and knowledge before the Chaos.  Tests are conducted that determine the man has a metal skeleton.  He remembers he was invented to cull the earth's population.  He is the Death Machine.  He goes back to where he started and the voice tells him to return to the metal room.  But the man says he has a wife and a kid now, so he'll stay outside thank you very much.  The computer says that's probably okay.
Email Post
Labels: 1960s sci-fi