When high-schooler Tom Naylor moves from Chicago to a small town in Iowa, he doesn't find many opportunities for making new friends.  Robert, the only other 16-year old in town, is too distracted by his own popularity to bother with the newcomer, and the only girls who take an interest in him are those deemed "undateable" within the school's social heirarchy.  One kid does want to be his friend, however, a habitual F-student described as "fat" and "smelly" named Floyd.  Finally Tom does meet someone worth hanging out with--Ward Alexander--a 20-year-old recently discharged from the military because of his asthma.  Thing is, there is a rumor in town that Ward was kicked out for being "fruity."  And when Tom shows more interest in playing classical piano than in seeing Floyd's collection of dirty girlie magazines, rumors begin to spread that Tom is also a "homosexual." 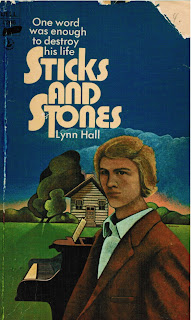 To author Hall's credit, Tom doesn't completely freak out at being labelled gay, even when he's not allowed to take part in a State music competition he's sure to win.  Ward eventually confides in Tom that the rumors are true, he is gay and that's why he was discharged from the Army, but it only temporarily strains their friendship.  And in the novel's most surprisingly progressive moment, Tom stops to consider for a moment that he might actually be gay (he does like to play the piano, after all, and every girl in school seems to avoid him).

Perhaps feeling fat and smelly Floyd deserves some form of retribution for starting the rumor, author Hall has him killed in a car wreck in the final pages.  A bit harsh, perhaps, but then again, the kid was a fat, smelly, homophobe.
Email Post
Labels: 1970s queerish teens