Spaceman lands off coast of Florida and seeks refuge in a church, where he is taken in by the local minister.  Meanwhile, having been alerted to the arrival by radar, the government begins searching for the mysterious visitor, hypothesizing that he might actually be a Cuban spy.  Back at the church, the minister names the spaceman "Peter" and begins teaching him English.  The minister is especially excited because he has seen "Peter" the spaceman kneel before the cross in church and pray, thereby suggesting an intergalactic validity to Christianity. 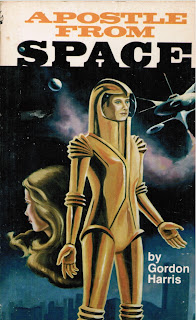 The government eventually figures out "Peter" is the real deal, and not a Cuban.  Big plans are made for "Peter" to address a joint session of Congress and the United Nations.  In the meantime, he tours our space facilities and rather politely lets us know we are idiots (our rockets, for example, still use "fuel" and "stages" rather than simply converting light into energy).  "Peter" also has some type of courtly love thing going with an earth girl.  We learn that Peter's planet also believes in a "Son of God" who died for the mortal world's sins.  They have no bible, but still hear the voice of God directly.

At the big United Nations speech, "Peter" tells us his planet is smaller, more advanced, etc.  They only noticed us when we made a trip to the moon, and have sent "Peter" to find out if our intentions for space travel are hostile or peaceful.  We appear peaceful...for now--they'll keep watching.  "Peter" then "dissolves" as he walks down a corridor, apparently transported back to his home world.  He takes a Bible with him as a souvenir.
Email Post
Labels: 1970s cosmic crap religion sci-fi ufo