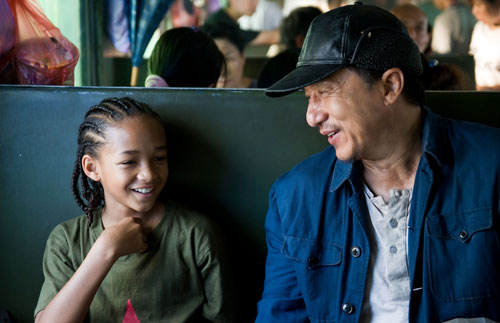 Many complain today that Hollywood refuses to make any "quality" science-fiction films.  After a "golden-age" in the late 60s and early 70s, this theory maintains, Hollywood in the wake of Star Wars conceptualized "sci-fi" as just another iteration of the blockbuster mentality, making the genre not so much about "ideas" as about velocity, explosions, and (with CGI) things variously morphing into other things.

But this is elitist blather, I say.  Hollywood still makes some extraordinary science-fiction titles from time to time.  In evidence, I present to you the recent remake of The Karate Kid (2010), which I just had the pleasure of viewing while trapped for several hours in an airplane.

Like all the best science-fiction, The Karate Kid takes place in a world that we can still reasonably recognize as our own, the "day-after-tomorrow" rather than centuries into the future.  As the story opens, Dre (a child of indeterminate age, somewhere between 8 and 13 in my estimation) must move with his mother to China.  Ostensibly, Mom has a new job, and as Detroit continues to bear the symbolic burden of America's collapse (signified here as a few shitty streets that pass by on the way to the airport), she has no choice but to uproot Dre and take him to Beijing.

Things do not go well for Dre when he first arrives in China.  As an African-American child somewhere between the ages of 8 and 13, he immediately finds himself suffering profound culture shock.  In a ritual of humiliation, he is utterly schooled by an old man in a game of ping pong.  Even more horrifying, he tosses up an "air ball" in a pick-up game of B-ball against Chinese opponents (yes, just ponder the true depths of that humiliation for a moment).  And when he tries to work his game on a cute Chinese girl in the park (who appears to be somewhere between 8 to 3 years older than him, depending on where we ultimately fix Dre's age), he gets his ass kicked kung-fu style by a local teen sociopath.

Dre takes a few more pummelings before Jackie Chan, disguised as the handy-man for Dre's apartment building, intercedes and--in a somewhat embarrassing spectacle--beats the crap out of the 4 or 5 teenage boys harassing Dre.  A bit more plot ensues, and before you know it, Dre is matched to fight the meanest of his tormentors at an upcoming Kung-Fu festival. 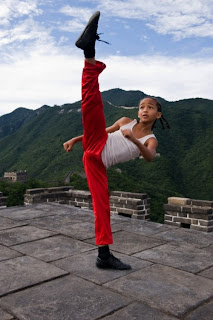 After this somewhat plausible and relatively naturalistic opening, the film then shifts hard into the science-fiction mode.  Rather brilliantly, the filmmakers announce up front that the final showdown between Dre and his bully is of no real consequence, that the impending "honor match" is just a pretext for the film's other ambitions.  We know this because the 8-to-13-year-old Dre, a stick-figure in dreadlocks, has absolutely no hope of defeating his opponent no matter how much kung fu he learns.  Simple physics make this an impossibility (unless of course Dre is actually a robot of some kind, but happily, the film avoids this more banal possibility).  Kick the bell all you want kid, fifty pounds in weight and muscle say you're going down.

So what is the film about then?  We soon discover that Jackie Chan is not actually a "handy man," but is in fact an agent of the Chinese government working on an incredibly ambitious program of international social engineering.  Understandably anxious about their massive investment in U.S. debt, China has decided to fly every single "at risk" child in America, one by one, to the People's Republic so that these kids may be re-educated as more productive workers for the global economy.  While Dre has yet to go full-on "gangsta," many of the signs are there: sassin' back to his Mom, dropping his jacket on the floor rather than hanging it up, a taste for the hip-hop music. Before things get worse, Chan is there to instill ancient Chinese values in the boy, such as unwavering discipline, respecting one's elders, and learning something about the local culture before you go hitting on the woman-folk.

Having been beaten down repeatedly by his school's teenage thugs (also clearly working for the government), Dre is naturally eager to learn the kind of "heart-from-ribcage" kung fu he has seen on film and television.  But Chan has other plans.  Using Dre's own disrespectful jacket-hanging habits against him, he forces the boy to engage in days, maybe even weeks of a repetitive jacket-hanging drill.  "Pick up the jacket.  Hang up the jacket.  Put the jacket on.  Drop the jacket.  Pick up the jacket." And so on.  Speaking for the displaced fears of many white suburbanites back in the U.S., Chan also tells Dre he needs to change "his attitude" about the drudgery of this mindless task, to be happy for the opportunity to stand in the rain five hours a day repeatedly hanging a jacket on a peg. 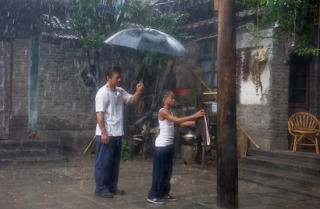 This goes on for so long that finally Dre cracks and calls bullshit on the whole enterprise, whereupon Chan reveals that this simple repetitive exercise has in fact made Dre a kung fu master.  He is now ready for his showdown with his nemesis (who again, despite Dre's mastery of the martial arts, would still wipe the mat with him).

But as this is science-fiction rather than a "feel-good" redemption movie, we have to look at what has really been achieved here.  Drained of his "bad attitude," disrespect, and laziness, Dre is now perfectly honed through muscle-memory to return to Detroit and screw in dome-lights for the new automobiles required by China's emerging middle-class.  In effect, he has become "a robot," ready to work with reflexive commitment and discipline on the task at hand.  America's structural economic underclass is thus "saved" by basic tenants of Communist social administration and reasonable production targets.

There is some mystical crap thrown in to disguise this perhaps unpleasant behaviorist truth,  Chan taking the kid to a mountain compound where he sees a woman standing on a craggy precipice staring down a cobra (which, admittedly, any 8-to-13-year-old boy would find awesome).  And, as Chan here must assume the role of the "absent black father," he also at one point pretends to break down and cry over his own lost family, thus concealing this rather radical program of social engineering within the "universal" bonds of familial humanism.

So it's a win-win for everyone. America gets a more productive workforce, China gets their money back, and somewhat ironically, white Americans can rest easier having ceded their perceived "burden" onto a "free market" solution proffered by a "Communist" government.  And not a single laser-battle in the entire movie!
Email Post
Labels: Filmed Product Normalization